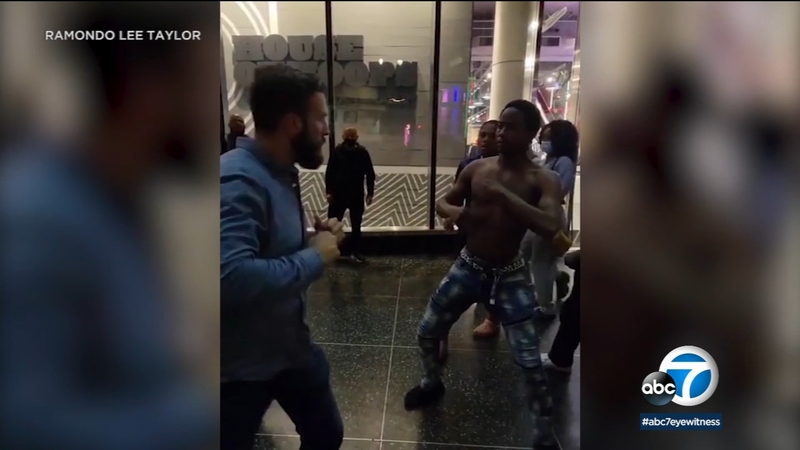 HOLLYWOOD, LOS ANGELES (KABC) -- The brutal beatdown of a tourist was captured on video Saturday night along the Hollywood Walk of Fame, prompting an investigation by authorities.

According to the Los Angeles Police Department, the man identified as the victim approached a person near the Hollywood & Highland center and claimed he was preaching the wrong thing.

A bystander's video shows what happened next. In the footage, several people are seen ganging up on the man on the sidewalk before the melee spills out onto Hollywood Boulevard, just west of the busy intersection at Highland Avenue.

Ramondo Lee Taylor was walking on Hollywood Boulevard at 10 p.m. when he saw this attack break out.

The video goes on for about 13 minutes, and the man is ultimately knocked unconscious. Police were called to the scene, and the victim was taken to the hospital in an ambulance. He was treated and released.

Taylor says he believes this was a hate crime, and police are investigating it as an assault with a deadly weapon hate crime. Police didn't elaborate on why this is being investigated as a hate crime, but they are asking for people with more information to come forward.

No arrests have been announced in connection with the incident.

"We are committed to the safety of all Angelenos and we are asking anyone with information that would lead to the identity of the suspects involved please contact the LAPD," police said in a statement. "Information can be provided anonymously and we will do everything in our power to ensure people are safe."

Violent crime in the Hollywood area has decreased by 15% from July to September, according to LAPD data. But this would add another offense to the list.
Report a correction or typo
Related topics:
los angeleshollywoodlos angeles countyfighthollywood walk of famecaught on camera
Copyright © 2021 KABC-TV. All Rights Reserved.
TOP STORIES
Robert Durst hospitalized with COVID-19, his lawyer says
Dodgers say Knebel, not Scherzer, will start Game 1 of NLCS
Strike deadline looms for 60,000 Hollywood crew workers
MacArthur Park temporarily closes for cleanup, renovations
Bill Clinton expected to be released from OC hospital soon: Doctors
Masks and vaccines are a must this holiday season, CDC says
Woman's car gets stolen with dog inside at gas station in downtown
Show More
Carson residents say foul odor in the air is making them sick
Hot, dry, windy: Red flag warning in effect for LA, Ventura counties
Here are the systems in place to prevent mix-ups of vaccine shots
Gunman shoots 3 Texas deputies from behind, killing one: police
IN kids mistakenly get COVID vaccine instead of flu shot: parents
More TOP STORIES News