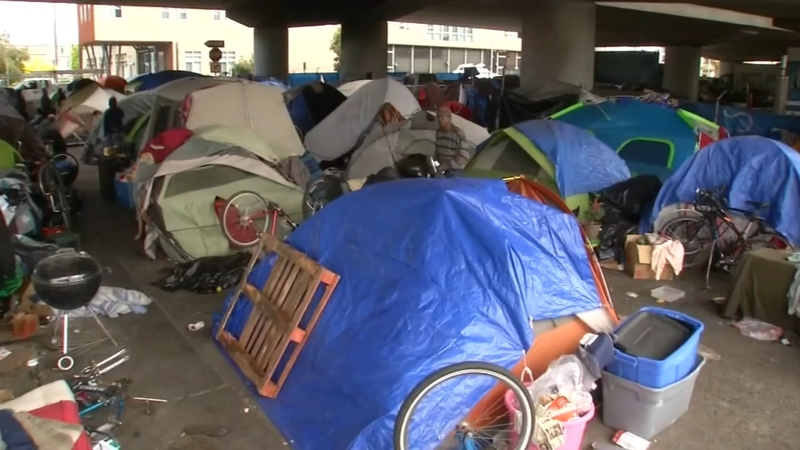 CA mayors ask Newsom for $3B over 3 years for homeless

SACRAMENTO, Calif. -- Mayors of nine of California's biggest cities are addressing the "fiscal cliff" created by the expiration of effective state funding programs that have served 25,000 homeless Californians.

They met in Sacramento with one message to the state: extend funding for critical homeless programs.

In 2020 the state allocated Homeless, Housing, Assistance and Prevention funds, or HHAP funds, to combat the big problem plaguing California.

Cities and counties could use this money on homeless interventions to get people off the streets.

The mayors say the money has been critical in housing thousands of residents statewide, but the funds are set to expire next year.

"We have built a lot of momentum," Fresno Mayor Jerry Dyer said. "We have provided a lot of hope to our homeless population. Now is not a time to lose that momentum."
EMBED More News Videos

Nine mayors from California's largest cities met in Sacramento with one message to the state: extend funding for critical homeless programs.

Out in the cold, no place to call home, and many are without hope. This is the situation for the unhoused population living in the state.

Dedicated funding from the government aimed to help this at-risk population will soon expire despite the impact it has already made.

Since the funds were first allocated, 25,000 residents served and shelter capacity increased by more than 9,000 beds.

"They are making a profound difference in solving the homelessness crisis and being one of the best investments and most responsive investments to the moral crisis that Californians recognize," Schaaf said.

Schaaf and Liccardo's cities have been the beneficiaries of part of these funds.

In San Jose, four separate quick-build apartment communities have moved hundreds of residents off the streets.

"That is the success we can replicate and scale if we continue HHAP," Mayor Liccardo said. "We need flexibility, we need to be able to move nimbly, more quickly, more cost-effectively to really address this crisis."

The big city mayors want the state to provide one billion dollars a year for three more years of this flexible homeless funding.

"Without this continued funding, roughly two-thirds of our existing shelter systems and these innovations will fall off a fiscal cliff," Schaaf said.

"That is why we are here pushing together to provide hope for our communities with the continuation of HHAP," Liccardo said.