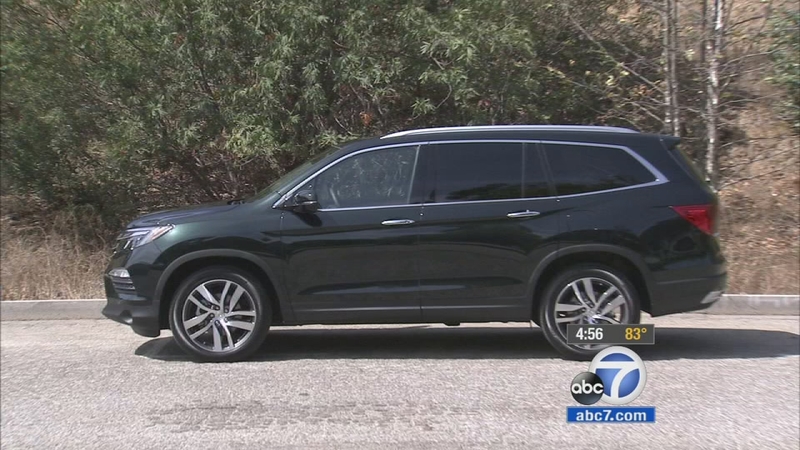 LOS ANGELES (KABC) -- Honda has given its Pilot a make-over for the 2016 model year. The Pilot is a significant vehicle, as it's basically the one that got a whole segment started back in 2003.

The original model was the blending of SUV looks and a smooth-riding mini-van chassis, offering three rows of seats in a sport utility vehicle that didn't ride like a truck.

Twelve years and two redesigns later, the new Pilot carries the formula into a new era. As with other vehicles in its class, technology plays a big part.

In terms of efficiency, direct-injection and a 6-speed or 9-speed automatic transmission is included, depending on trim level. LX, EX and EX-L models get the 6-speed, while Touring and Elite trim level Pilots come with the 9-speed, which is a first for Honda.

Fuel economy is up a bit, with EPA figures ranging from 19 mpg city to 27 mpg highway, depending on trim level and whether the buyer chooses two-wheel drive or four-wheel drive.

Optional safety technology is also available, depending on trim levels. When equipped with various electronic aids, the Pilot can keep itself in its own lane, and even brake for you if a collision scenario is detected.

But some technology might take some getting used to. The shift mechanism is a series of different buttons, which are unlike any other transmission control on the market. If you're someone who likes to adjust the radio volume a lot, a touch screen instead of a conventional rotary knob could be a little frustrating. A knob-less volume adjustment is making its way into many Honda models.

The Pilot really did break new ground when it came out, combining the preferred appearance of a sport utility vehicle with the advantages in the ride and handling of a mini-van. But that was a dozen years ago, and now Honda's largest SUV has competition for buyers who are looking for a three-row crossover SUV.

For example, the Pilot's long-time rival, the Toyota Highlander, also got a thorough redesign recently. It actually came out first - in 2000 - but didn't add an optional third row of seats until after the Pilot debuted.

Ford has brought its Explorer into the modern era and gave it a mild refreshing this year. The Explorer evolved from a truck into a car-like design and has seats for up to seven passengers as well.

GM's trio of the Chevy Equinox, Buick Enclave and GMC Acadia are still around since debuting in 2007. They've picked up technology over the years to keep them competitive, but they do sometimes feel a little dated overall. Given typical vehicle lifespans in the auto industry, a redesign is probably around the corner.