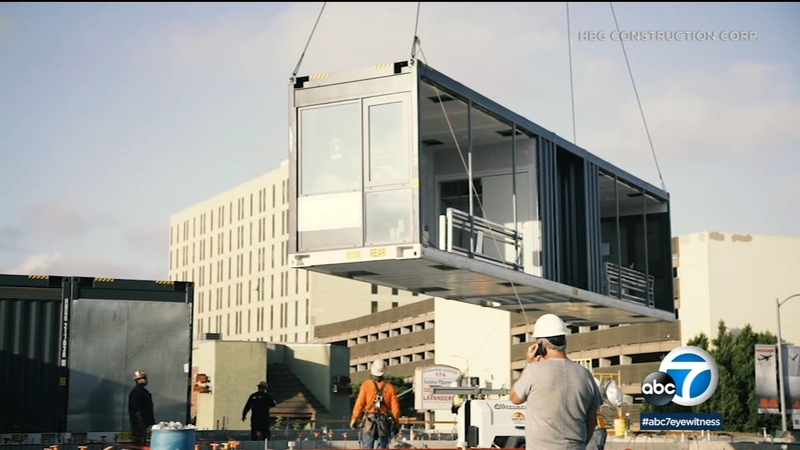 LOS ANGELES (KABC) -- On Alvarado street, just south of Beverly, the boxes are going up. They're designed to be portable and stackable like shipping containers, but comfortable to live in.

The units are assembled in China and shipped to the port of Long Beach. Then, they're trucked to the construction site and hoisted in place by a crane.

It's a process that's going to take about a year from start to finish - but compare that to more than two years to build a comparable apartment building, the old-fashioned way.

The need is urgent. Los Angeles city and county are pouring hundreds of millions of dollars into the homeless crisis. But last year, the homeless population increased to 60,000.

The head of the county's homeless initiative says each day of 2018, 133 people moved into permanent housing - but 150 people became homeless.

The numbers are great, and the need is great. In fact, the developers of this project said they had to move homeless people off of the site before they could even start building.

Architect Peter Demaria took Eyewitness News through one of the typical units. When finished, they will be 400 square feet and partially furnished.

Tenants are required to pay 30% of their income on rent.

"Just this little space enables people to say, 'I've got an address. I don't have to worry about where my next meal is coming from,' Demaria said.

There are three more projects just like it in the works, and all of it is the brain child of fashion retailer Max Azria. Azria put up the seed money but sadly passed away before he could see it happen.

His widow came to the site to watch Azria's vision become reality.

"He would be so excited. He would probably have his hard hat on, and he would be there to check the whole building," said Lubov Azria.

Moizel, who is an L.A. native, normally builds mansions for a living. But he finds great satisfaction building this project, Hope on Alvarado.