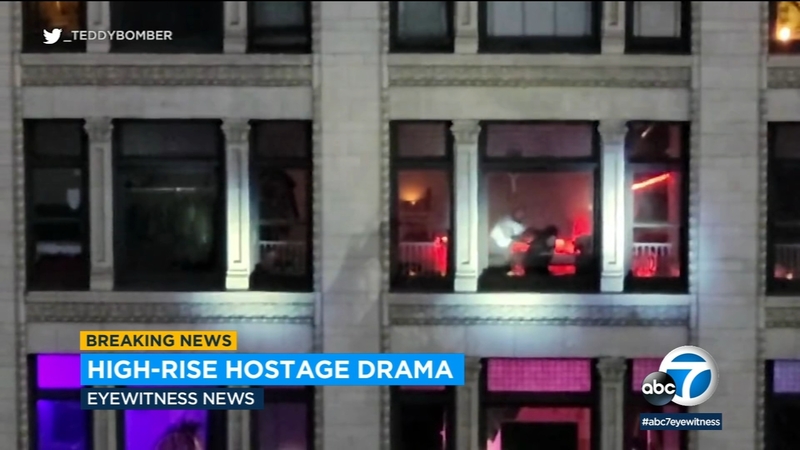 DOWNTOWN LOS ANGELES (KABC) -- A woman was rescued and a suspect was shot and killed by police during a violent hostage situation that unfolded at a downtown Los Angeles apartment Friday evening.

Video captured by a bystander appeared to show the suspect hold the hostage at gunpoint, prompting a SWAT team to burst through the door and open fire.

"He's got a gun to someone's head," a bystander is heard saying in the video as other terrified witnesses watched.

The Los Angeles Police Department said the man was involved in a violent crime spree, including shooting at a family, prior to taking the woman hostage at high-rise apartment building at 6th and Main streets.

Police said surveillance video from inside the apartment complex allowed officers to see the woman was in danger.

"(Officers) saw the suspect in a hallway armed with a gun forcing a female to come with him. At that point, we knew we had a hostage situation," LAPD tweeted. "While LAPD personnel were outside of the complex they saw through a window, the suspect holding a gun to the hostages head.

"Based on the already incredibly violent actions & fearing the suspect was going to kill the hostage, SWAT entered the apartment."

They saw the suspect in a hallway armed with a gun forcing a female to come with him. At that point, we knew we had a hostage situation. While LAPD personnel were outside of the complex they saw through a window, the suspect holding a gun to the hostages head.

The suspect was shot and died at the scene, according to LAPD.

In the video, loud explosions are heard and the suspect starts to move around the apartment. At one point, he grabbed the hostage prior to SWAT opening fire and entering the apartment.

The woman held hostage was taken to a hospital. Police described her as being OK physically.

According to police, the suspect first held a gun to a man's face in the area of 8th Street and Broadway around 4:10 p.m. The gunman pulled the trigger, however, the gun did not fire.

The armed man then went to a business on Broadway and encountered a family - a man, woman and a 14-year-old boy.

"Inside that business, the suspect pointed the gun at the group. The group ducked and the suspect fired at them," said LAPD Detective Meghan Aguilar. "One of those rounds grazed the 14-year-old on the side of the head. He's been taken to a local hospital, where he is expected to survive."

After shooting at the family, he attempted to carjack a woman but failed.

The suspect then became involved in a struggle with a bicyclist, who noticed the armed suspect reach into his waistband. Security officers in the area directed officers to the gunman.

It was then that police chased the suspect to the apartment building at 6th and Main. The suspect fled into the building and the hostage situation began, according to LAPD.