Owners at the luxurious Ritz-Carlton in downtown L.A. are opposing a plan called Project Roomkey that would temporarily move the homeless into empty hotel rooms at the Ritz and the adjoining J.W. Marriott hotels.
KABC
By David Ono and Lisa Bartley 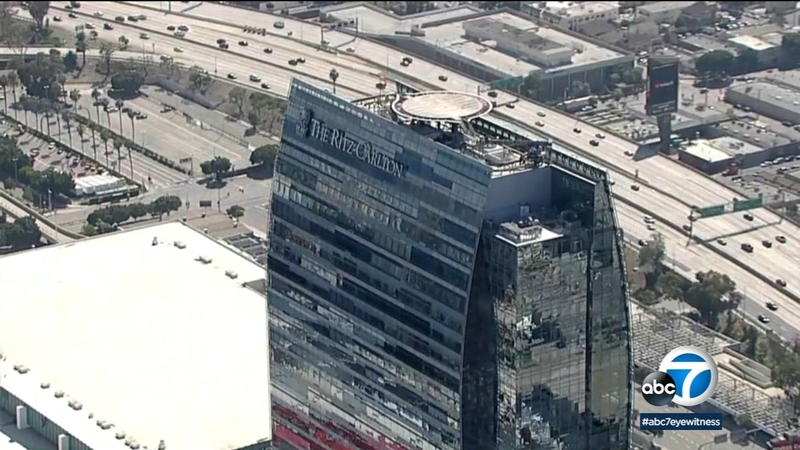 DOWNTOWN LOS ANGELES (KABC) -- Imagine spending millions of dollars to buy one of the luxurious Ritz-Carlton residences in downtown Los Angeles only to learn you may soon be sharing space with the homeless.

It's a real possibility for owners of the 224 units that make up the top floors of the landmark Ritz-Carlton high-rise that adjoins the J.W. Marriott at L.A. LIVE.

"Average price for a one-bedroom is about a million bucks," says realtor Art Avaness, who used to own a unit at the residences and still manages six units for other owners. "Minimum one million and goes all the way up to $40, $42 million."

Project Roomkey is a joint effort by the state, county and city of Los Angeles to temporarily house some of the most vulnerable homeless people in hotels and motels across the state. As of Monday, more than 3,000 rooms in Los Angeles County have been secured for Project Roomkey with 1,517 rooms already occupied. The Federal Emergency Management Agency will reimburse the hotels for 75% of the cost.

Large hotels throughout Los Angeles County are helping to house and treat the homeless during the coronavirus pandemic.

Statewide, Gov. Gavin Newsom set an initial goal of securing 15,000 rooms for the homeless. Los Angeles County and the city of Los Angeles also hope to secure 15,000 rooms locally during the coronavirus crisis. On Monday, Mayor Eric Garcetti announced that the city has secured 460 new rooms at an unnamed hotel in downtown Los Angeles.

"Each hotel brings new hope, each room could save a life," says Mayor Garcetti, who notes the city has reached out to more than 800 hotels and motels to date.

"Hotel and motel operators are ambassadors of the Angeleno spirit."

Los Angeles City Councilman Mike Bonin tells Eyewitness News that some hotels have been reluctant to participate in Project Roomkey.

The governor said California has secured a total of 10,974 hotel rooms for the unsheltered as well as another 5,025 motel rooms, thanks to a partnership with Motel 6.

Bonin co-authored a motion that states some hotels have been "unwilling to participate, reneged on initial interest, citing security concerns, liability issues, objections from corporate management or fear of lost revenue from being branded a 'homeless hotel.'"

Bonin is asking city and county entities to report back to the council on which hotels and motels are not participating with an explanation for their lack of participation. Bonin's motion also directs them to create a list of all hotels in the city of Los Angeles that have received any sort of "public subsidy, tax breaks, or economic development incentives."

"I don't think fancy hotels should be exempt from Project Roomkey," says Bonin. "As we look to hotels to step up, those that have benefited from public investment and public largess - those are the first that we should be looking towards."

According to a 2018 report by the Los Angeles city controller, the city of L.A. agreed to pay the owners of the L.A. LIVE complex, which includes the Ritz-Carlton and J.W. Marriott, $270 million in financial incentives over a 25 year period.

Representatives for the hotel did not respond to our requests for comment.

"The hotels are losing money and hotel workers aren't getting paid," says Bonin.

"This, literally, can be a win, win, win - a triple bottom line of improving public health, helping the hotels stay solvent, which helps he city treasury and putting people back to work," Bonin added.

Eyewitness News has obtained an email from the Homeowner's Association for the Ritz-Carlton Residences that tells homeowners "We have resisted this here on our L.A. LIVE campus" since the initiative was first brought to them by Gov. Newsom.

The email lists concerns about safety, security, property values and overall lifestyle. Owners are being urged to contact their local representative to oppose any participation in Project Roomkey by the Ritz-Carlton or J.W. Marriott.

"Our main point for waiver, is that we have residents attached to this building," the email reads.

John Satterfield owns two of the residential units at the Ritz-Carlton and echoes those concerns.

"Aside from the logistical concerns, safety concerns, there are families that live down there with children," Satterfield tells Eyewitness News. "I don't actually trust how they're going to control it."

Satterfield calls it a "failure of our local government" that 60,000 homeless live on the streets of Los Angeles County. He's pushing for a long-term solution.

"It doesn't really do any good to have them stay in a hotel room for a couple weeks and then say, OK, the pandemic has passed," says Satterfield. "Now, you guys can go on about your lives. It's just unconscionable that we allow citizens in this country to live this way."