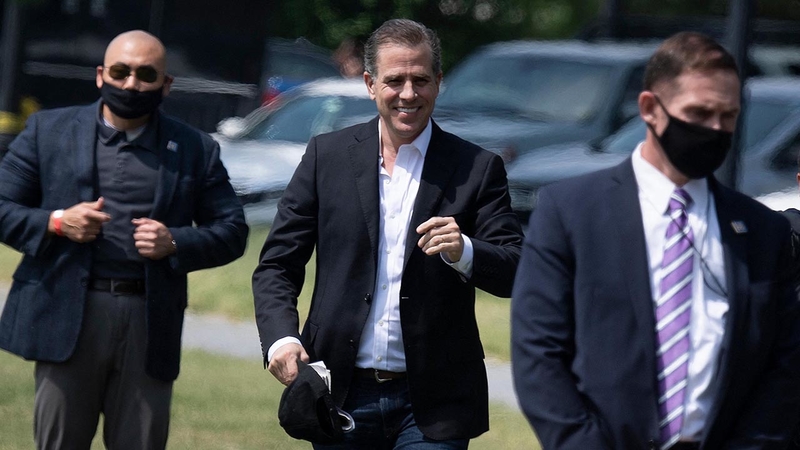 NEW YORK -- Hunter Biden's artistic debut is sparking ethics concerns for the White House as some critics raise eyebrows over the high-priced pieces and whether they pose a conflict of interest.

Sources told CNN the White House was involved in forming an agreement between a SoHo New York Gallery owner, Georges Bergs, and Hunter Biden in an effort to address any ethics concerns.

The Washington Post was the first to report on the White House's involvement.

Hunter Biden's artwork is set to be displayed and sold in September at a private and confidential opening in Los Angeles, followed by an invite-only event in New York, a Georges Bergés Gallery spokesperson said. Pieces are priced between $75,000 and $500,000, according to the spokesperson.

Two sources familiar with the sales arrangement told CNN that the purchaser of the artwork will be kept anonymous and neither Hunter Biden nor the public will have knowledge of who bid on or purchased the work. If there is any unusual behavior -- such as the offer price being too high or the collector doesn't appear interested in the work -- the gallery is expected to turn down the offer, the sources said.

However, there's no clear enforcement mechanism for the standards agreed upon by the gallery and the prospective purchasers of Hunter Biden originals.

Some ethics experts like Walter Shaub -- the former head of the Office of Government Ethics from 2013 to 2017 -- have raised concerns about Biden's new venture.

Shaub, now a senior ethics fellow at the Project On Government Oversight, said the sale is "really a terrible idea."

"They've basically outsourced government ethics to a private art dealer and they're depending on unknown art purchasers to help keep the secret," he said, referencing the sales arrangement.

"You know, on one level I have some empathy for the President because he can't control his relatives," Shaub added. "But on another level it just is implausible that this art from an unknown artist would be selling at this price if it didn't have the Biden name attached to it. The cachet that comes with buying this art is getting to say that you own art created by the President's son. And so it really looks like the President's son capitalizing on his father's public service."

Shaub also argued that they've "created opportunities for people to try to get preferential treatment without even having to pay the price."

Andrew Bates, a spokesperson for the White House, said in a statement that "the President has established the highest ethical standards of any administration in American history, and his family's commitment to rigorous processes like this is a prime example."

CNN has reached out to Hunter Biden's attorney for comment on the art sales.

On the Georges Bergs Gallery website, Hunter Biden's biography does not mention that he is the son of the President.

Keeping with the style of other bios on the website, the biography sticks to his art background does not get into the more controversial parts of his past. Among the flashpoints for Hunter Biden is recent years is his past work on the board of the Ukrainian energy company Burisma, which played a role in former President Donald Trump's first impeachment. No wrongdoing from that job was ever proven against Hunter Biden. It also does not mention that federal investigators have been actively looking into his business dealings. CNN reported in December that the investigation is examining multiple financial issues, including whether Hunter Biden and his associates violated tax and money laundering laws in business dealings in foreign countries, principally China, according to two people briefed on the probe. Hunter Biden has said he is "absolutely certain" he'll be cleared in that investigation.

The biography mentions his art style, refers briefly to his past work as a lawyer and describes him as someone who "now devotes his life to the creative arts."

Hunter Biden has been open about his battle with addiction, penning a book published earlier this year which detailed his struggles, and crediting art as a coping mechanism.

He told the New York Times last year that painting was "literally" keeping him sane, adding, that it "keeps me away from people and places where I shouldn't be."

At the start of his administration, President Joe Biden vowed to avoid even the perception of a conflict of interest after years of accusations against former President Donald Trump that his business and family benefited from his office, including having his daughter and son-in-law hold top White House jobs.

"We're going to run this like the Obama-Biden Administration," the President told People Magazine early in his tenure. "No one in our family and extended family is going to be involved in any government undertaking or foreign policy."

He added, "And nobody has an office in this place. They always have access to Pop and Nana but nobody (will have an office)."

Before being sworn-in as President and now, months into his administration, the President has been dogged by scrutiny over his family's actions and their appearance of conflicts of interest.

The President has faced intense scrutiny for Hunter Biden's business dealings -- an issue that became a lightning rod for the 2020 presidential campaign and sparked impeachment proceedings against then-President Donald Trump. In recent weeks, the administration has also been pressed by ethics experts over the appearance of nepotism among senior-level staff and the hiring of their family members.