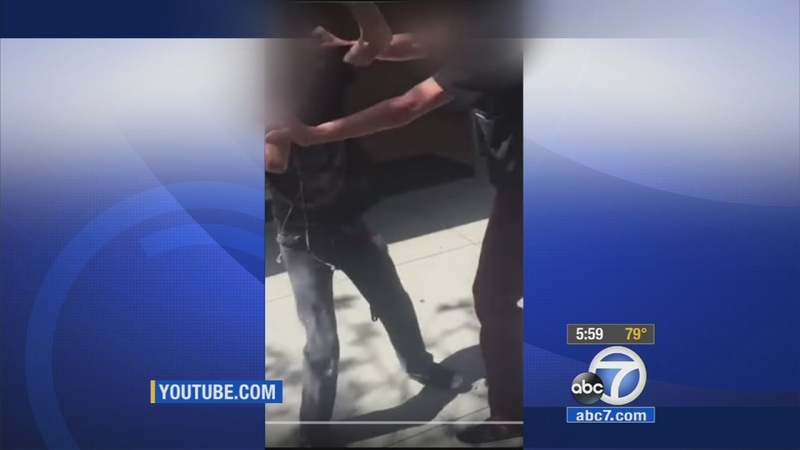 Huntington Beach police said the fight, which was caught on video and shared on social media, took place on campus at about 12:30 p.m. The video shows a male student beating up his classmate, and then a third student intervening and hitting the suspect, knocking him to the ground.

The third student is heard asking the suspect why he was "hitting a blind kid," police said in a news release. That same student who stepped in also told the suspect to leave the teen alone in the future or he will face the consequences.

Detectives, along with school officials and resource officers launched an investigation following the alleged case of bullying.

Officials learned the victim and suspect know each other and have a history of not getting along. Police said the victim walked past the suspect at the school Wednesday afternoon, and an argument started, which then turned physical.

"It does not appear the incident has any connection with the victim's disability," police stated in the news release.

The suspect was arrested for misdemeanor battery and released to his parents. Authorities said no other arrests were going to be made in this case.

The fight is what everyone was talking about on campus Thursday. Most of the students Eyewitness News talked with said the student who came in to break up the fight did the right thing.

"So many people came out at once and said he's blind, and he continued to fight. But the one that broke it up, glad he was there," said Devin Carty.

"Well I thought that it was good that the guy came in and broke it up because the kid was blind, and that's totally not necessary to punch him," said Maddie Botts. "He probably shouldn't have beat him up. To break it up he probably could have gone to a teacher or something, but I'm glad he was there because he broke it up."

They also think the person who broke up the fight shouldn't be punished.

"I think it was the right thing to do because like he's messing with a blind kid, and that's not cool," said Chase Burton.