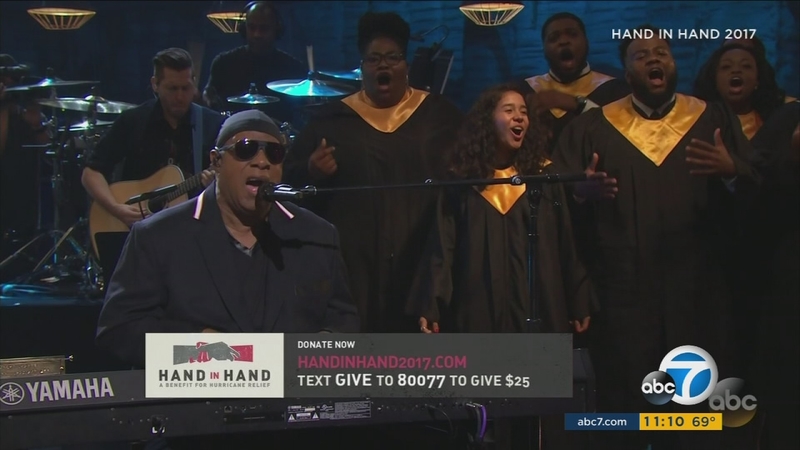 Stars come together to raise money for hurricane relief

The goal: to help those affected by hurricanes Harvey and Irma.

The telethon, called "Hand In Hand: A Benefit for Hurricane Relief," was broadcast on 15 networks, including ABC. It was also livestreamed on various sites all around the world.

The event brought out big names who helped bring in big dollars.

In the hour the telethon was on the air, it had already raised $14.5 million. By about midnight PST, the number was over $44 million. Updated figures were expected on Wednesday.

This night of giving kicked off with Stevie Wonder leading a rendition of "Lean On Me."

The show biz community gathered "hand in hand" to help raise money - fast - for people hit hard by the hurricanes.

Actor Wilmer Valderrama said of his profession: "We are that secondary army that's deployed to just do something that very few can achieve and I think that that's a blessing. That's a gift."

"When a tragedy like this happens, and it's a natural disaster, you don't want to feel alone," said actress Marcia Gay Harden. "You're American. You want to feel like your fellow Americans care. And that's what it's all about."

Barbra Streisand told us: "It was hitting home for me because on my last tour, I started in Houston and then I finished three cities in Florida - ending in Miami."

As the telecast began, Leonardo DiCaprio said, "Let's join hands and lift the victims out of the darkness."

As the calls came in, the stars were there to answer them.

Actor Craig Robinson told ABC7: "The people calling in were pouring their hearts out on the phone and they were so special and so giving and so gracious."

"A lot of people who called have not been affected or they don't know anybody who's been affected," Fonsi said. "They just want to help. And to me, that's so powerful."