Hurricane Heroes: rescuers and first responders step up in the wake of Irma 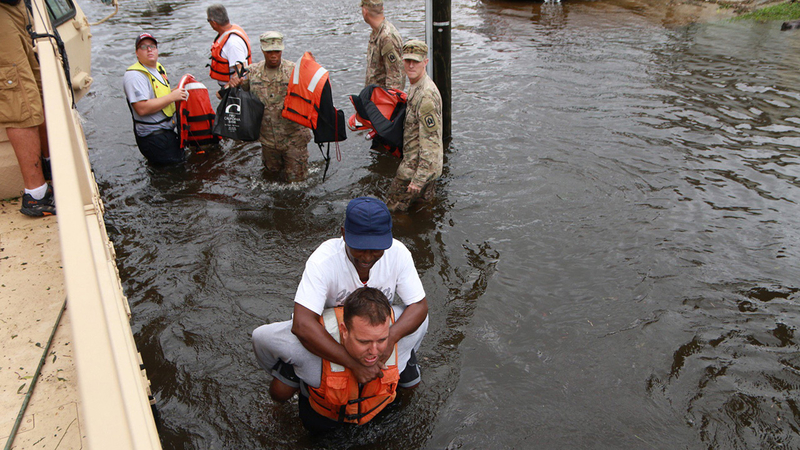 As Hurricane Irma barreled through Florida and continues to travel up the Southeast coast of the U.S., many rescuers and first responders have stepped up to aid those in need.

Flooding, power outages and damage to homes and streets have affected millions. Here are stories of some of the heroes who are working to help those affected by Hurricane Irma.

OCFRD and @NationalGuard team up to rescue 149 residents from 550 homes impacted by flooding in Orlo Vista area this morning. pic.twitter.com/VdWYIV2miM

OCFRD and the National Guard were able to rescue 149 residents and countless pets from flooding in Orlo Vista on Monday morning.

Countless pets rescued from Orlo Vista flood with help from @NationalGuard. Thank you for supporting us and coming to our community's aid! pic.twitter.com/vRT2NCxmPj

Officer picks up American flag from highway after Irma


Even in the midst of a storm, we are reminded of the love for our country and community. #HurricaneIrma #September11 pic.twitter.com/n3G5mqMKbY

Coral Springs Police Department shared a touching video of a police officer stopping to pick up an American flag scattered among the debris from Hurricane Irma on September 11.

Officer with his K-9 take a nap after working nonstop

The Fort Lauderdale Police Department shared a touching photo of an officer and his K-9 taking a nap with the hashtag #WeAreInThisTogether.

Fire and police department rescuers from Coral Springs were able to assist a mother in labor during Hurricane Irma on Sunday. Rescuers were able to transport the mother and her baby, name April, safely to the hospital.

Nashville Fire and Rescue were able to save three residents and two dogs from a flooding apartment building in Jacksonville.

Landon Routzong, 9, raced to pay for the meal of a car in front of him in the Chick-Fil-A drive-thru after noticing a Florida license plate.

When a 9-year-old in Alabama noticed the Florida license plate on the car in front of him in the drive-thru on Friday, he asked his mom if they could pay for the evacuee's meal.

Soldier sings happy 80th birthday to Shelby Johnson while handing out cookies as they wait out #HurricaneIrma. #FLNGAlwaysThere pic.twitter.com/D4GdFak6rn