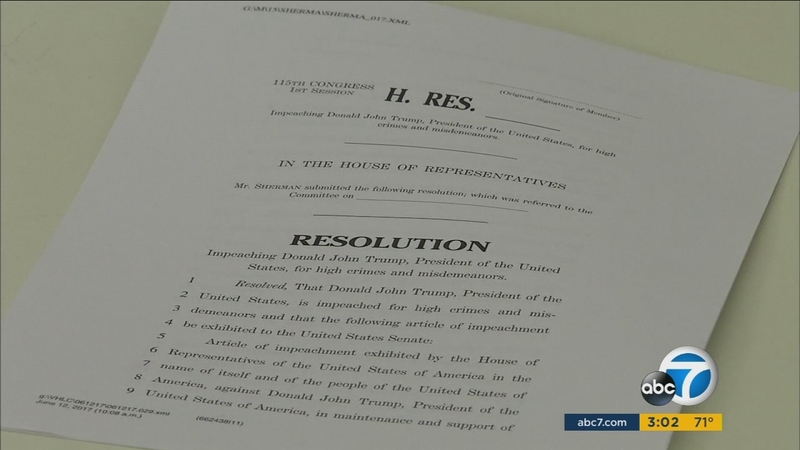 Sherman said that Trump obstructed justice in the Russia investigation.

The U.S. Constitution says that a president can be impeached for committing "high crimes and misdemeanors."

Fifty percent of the House of Representatives and two-thirds of the Senate must agree to remove a president from office.

Congressman Brad Sherman, D-Sherman Oaks, has drawn up impeachment articles for President Donald Trump, saying he has obstructed justice in the Russia investigation.

The process begins in the House.

"We serve the same role as a grand jury. The grand jury standard is probable cause. There's a lot more than probable cause to believe that the president threatened (former FBI Director) James Comey with the loss of his job, and in fact, fired James Comey because he would not alter the Michael Flynn investigation and other aspects of the Russia investigation," Sherman said.

He continued, "whether it goes to beyond a reasonable doubt, that's a decision the Senate makes."

Sherman said he's sent out possible articles of impeachment to every member of the House. He's asking for their feedback by the middle of this week.

No Republicans are supporting his efforts. Democratic Minority Leader Nancy Pelosi has publicly stated there's no evidence yet to support impeachment.

Sherman said some Democrats are supporting the effort.

"I've gotten some encouragement from a few...no one has said it is inappropriate to move forward at the current time."

Congressman Al Green, D-Texas, is also drawing up impeachment articles. Both Green and Sherman admit this process could take years.

If the president is eventually removed from office, Vice President Mike Pence is next in line to become commander in chief.

Eyewitness News asked Sherman about the fear that some Democrats have that a Pence presidency could be worse than a Trump presidency.