Will Power wins 102nd running of the Indianapolis 500 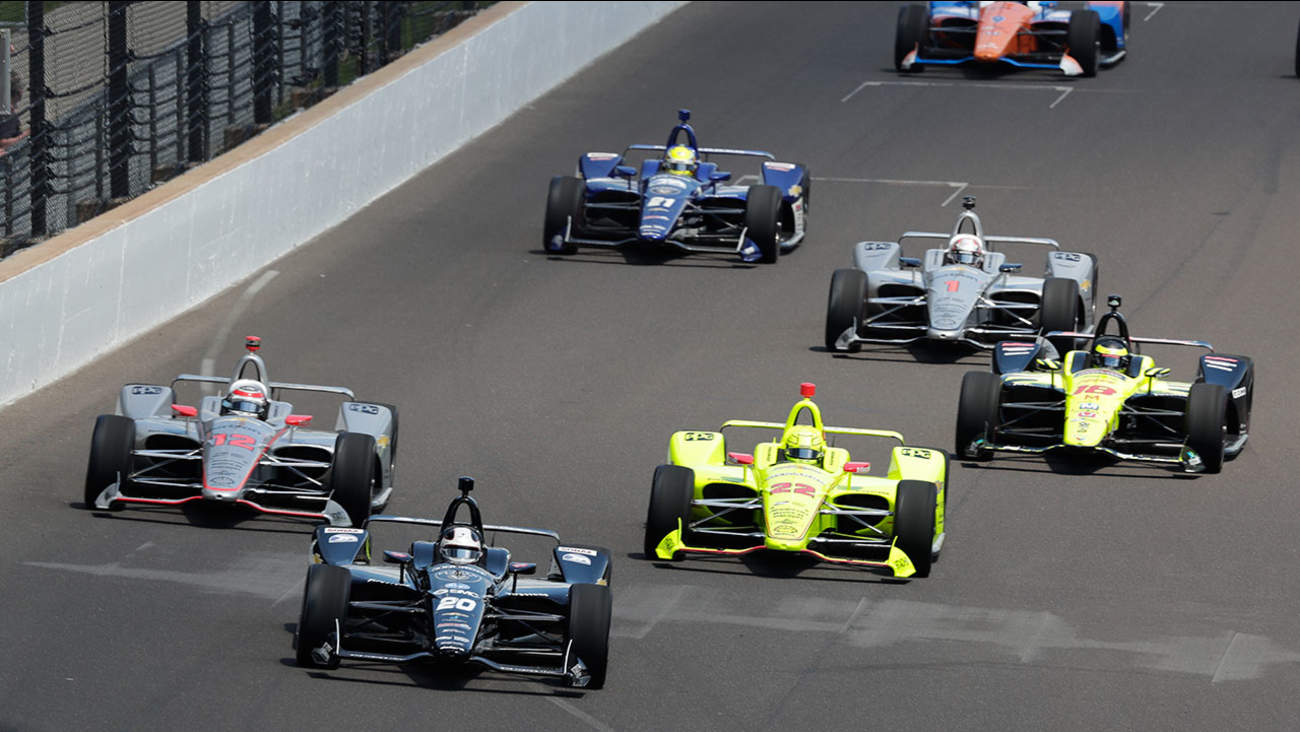 Drivers are shown in the early laps of the Indianapolis 500 auto race at Indianapolis Motor Speedway on May 27, 2018. (AP Photo/R. Brent Smith)

INDIANAPOLIS -- Will Power took the lead in the Indianapolis 500 with four laps to go, knew he had it won when he took the white flag all alone and spent the final lap yelling to himself as he pulled away from the field.

The 37-year-old Australian did just that in a dominant performance for Team Penske. He managed his fuel strategy perfectly as Oriol Servia and Jack Harvey had to pit in the closing laps, and then made all the right moves to hold off pole winner Ed Carpenter to win his first Indy 500.

"I was wondering if I would ever win it and thoughts when through my mind during the month, my career," he said. "I've had so many wins, so many poles. Everyone talks about the 500 and I just couldn't imagine winning a race in front of a crowd like this, this many people. It's just amazing."

We did it!! We got to drink the milk!#Indy500 #IndyCar pic.twitter.com/HYH0STDxlW

Power extended team owner Roger Penske's record of 17 wins in the "Greatest Spectacle in Racing," and it completed a sweep of May in Indianapolis for him. Power also won the road-course event.

He has 34 wins in IndyCar now, tying him with Al Unser Jr. for most on the career list.

"He hated ovals and now he loves them," said Carpenter, the local boy who had dominated the early stages of the race. "He and I love racing together. Maybe someday he'll race for me. I don't know if we have a tampering rule in IndyCar, but congrats Will."

Near-record temperatures at the start created a slick, 2 -mile oval, and new cars with less downforce proved to be a handful for even the most experienced of drivers.

Danica Patrick's career ended when she lost control and slammed into the wall.

Patrick announced months ago that she would retire after the Indy 500, the second half of the "Danica Double." She also wrecked out at the Daytona 500.

Patrick's career ended with a crash in Turn 2. She lost control of the car and hit hard in the outside wall, sliding back down across the track and into the inside barrier.

The rest of the field managed to miss Patrick as she came to rest on the grass. Despite the hard hit, Patrick managed to climb out of the car on her own.

She later said crashing was hardly the way she wanted to finish her racing career, but she's "grateful for all of it."

She decided long ago that the race that made her famous would be her last, and while she called the outcome disappointing, she also expressed appreciation for all that Indianapolis had given her.

"Yeah, it's an entire career," she said, "but what really launched it was this. It's both of them. I had a lot of good fortune here and did still have some this month. It just didn't come today."

She said that her team wasn't sure what caused the crash, but the data showed "a little lift in the middle, a little understeer, then back to it and it just swung."

Bourdais crashed a year after missing the race because of a harrowing, high-speed accident during qualifying, while Castroneves - who is now driving sports cars for Penske - was going for a record-tying fourth victory in the Indy 500 in a brief return to open-wheel racing.

Moments after climbing out of his wrecked car, he begged Penske for another chance.