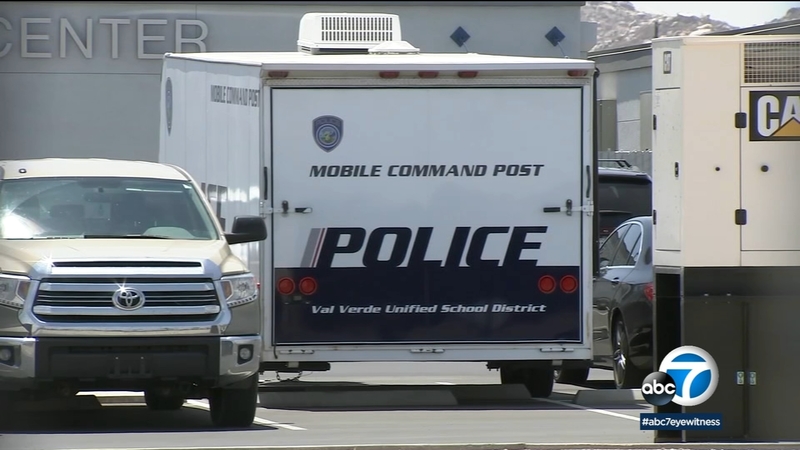 IE school board postpones vote on 'defund the police' resolution

PERRIS, Calif. (KABC) -- A controversial resolution considered by an Inland Empire school district to cut funding to campus police has been postponed indefinitely by the school board.

The resolution being considered by the Val Verde Unified School District in Perris would have cut funding to the school district police department by 30%, as well as require mental health evaluations for any student who is questioned, detained or arrested by an officer.

Critics who spoke out against the resolution accused those in favor of it of attempting to "defund police."

"Rather than being here to defund them, I think we should be here to say thank you."

Dozens of community members, campus police officers, parents and volunteers spoke out against the resolution during the public comment period of the Val Verde Unified School District's board meeting. Not a single person publicly spoke in favor of it.

But school board vice president Matthew Serafin, who drafted the resolution, said not enough attention is being paid to the mental health of students.

"I'm very proud of the things we do in this district, but mental health is one we've been lacking," said Serafin. "We really need something big; something that shakes the system. And quite frankly something that people don't like."

Serafin is no stranger to controversy. In March 2015, Serafin was a student and legislative council member at UC Irvine when he drafted legislation that would have removed the American flag from the wall of the Associated Students main lobby. The legislation said, in part, "flags not only serve as symbols of patriotism or weapons for nationalism, but also construct cultural mythologies and narratives that in turn charge nationalistic sentiments."

That decision was later overturned.

"It seems like the main discussion here is policing, and not mental health... That makes me feel sad," said Serafin. "If I could honestly remove (campus police) power to arrest people and only influence the youth's view on police, I would do that quite frankly."

Most school board members indicated concerns they had with the resolution as drafted and hoped to seek additional information from district staff to consider in a future study session.

The decision to postpone the vote on the resolution was unanimous.