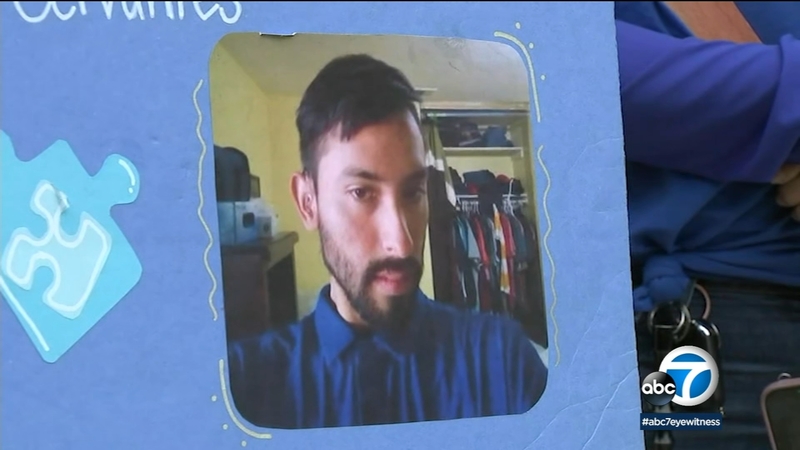 LOS ANGELES (KABC) -- The Los Angeles County Sheriff's Department Wednesday released body camera footage of the moment a 25-year-old man with autism was shot at his home in Cudahy by a deputy.

The shooting of Isias Cervantes on March 31 left him in critical condition with a spinal cord injury, and he may never walk again, according to attorneys representing the family.

Violence escalated within minutes when deputies responded to the 5100 block of Live Oak after a 911 call from Rosa Padilla, who said she needed help with her son. Cervantes' family claims deputies knew he had autism and was hard of hearing.

A mother is demanding justice after her 25-year-old son with autism was shot by Los Angeles County sheriff's deputies.

In the newly released video, the deputy can be heard screaming that Cervantes was grabbing for his gun. That's when another deputy shot him.

The full video can be viewed here.

The L.A. County Sheriff's Department released the footage hoping it would help the public better understand why they shot Cervantes, however, his family calls the video misleading. Attorneys for the family argue the body camera footage appears to fall off during the skirmish and the shooting isn't clear.

"The cameras on the ground tell you this is close contact initiated very quickly by deputies. So, the only way the cameras come dislodged is if you run into someone," family attorney Austin Dove said Thursday during a press conference.

Investigators say during the altercation, Cervantes attacked one of the deputies, gouging his eyes while attempting to reach for his weapon. His mother who witnessed the incident says her son wasn't a threat. She says he was shot for no reason.

Advocates for people with special needs have joined the family in demanding a private investigation.

Mental health expert Ananya Sreepathi says there needs to be more training for law enforcement responding to a scene where someone is suffering from mental illness.

"There are situations in which the mentally ill individual will commit a violent act or do something that endangers the safety of those there or the surrounding area, or the officers," Sreepathi said. "And in those situations, unfortunately, sometimes the police have no choice but to act in order to protect themselves and the other individuals."