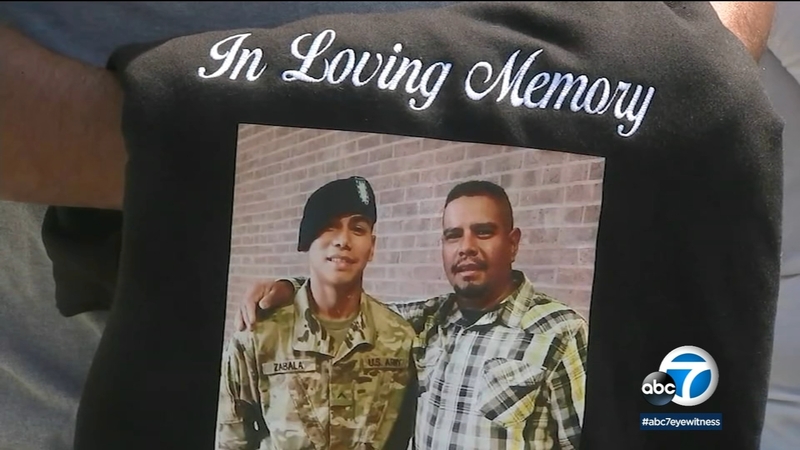 $20K reward offered in murder of Army veteran in Lancaster

LANCASTER, Calif. (KABC) -- Ismael Zabala, 26, was the pride of his family. He was a decorated U.S. Army veteran - a burly young man beaming with American patriotism and serving his country with distinction.

Sadly, the American hero would meet his tragic end on the very soil he vowed to protect from foreign enemies.

A gunman shot and killed the military veteran while he was enjoying a family birthday celebration the morning of Dec. 20, 2020 in Lancaster.

"It makes no sense," the father said. "He's a good kid. He touched a lot of hearts."

The victim's mother remains in tears hoping for justice and closure.

Detectives have a suspect in custody, but will not elaborate on his arrest. They are looking for another man, identified as Oscar Palazuelos, who they say is a second murder suspect.

Lt. Derrick Alfred of the Los Angeles County Sheriff's Department says an arrest warrant has been issued for Palazuelos. Authorities believe the suspect has gone into hiding.

Detectives say both suspects briefly attended the birthday party, but were asked to leave and that's when things turned for the worst.

Alfred says Palazuelos and the second suspect drew handguns, and Palazuelos fired his gun, hitting Zabala and his brother. Zabala died as a result of the gunshot wounds.

The L.A. County Board of Supervisors is teaming with the city of Lancaster and offering a $20,000 reward for information leading to the arrest and conviction of those involved with the murder of the Army veteran.

The victim's family now reflects on his positive outlook on life and his pride in serving his country. Family members showcase Zabala's military honors.

Alex Zabala said his son knew the meaning of respect and was a great athlete at Littlerock High School. He added his son was a good kid who always smiled.