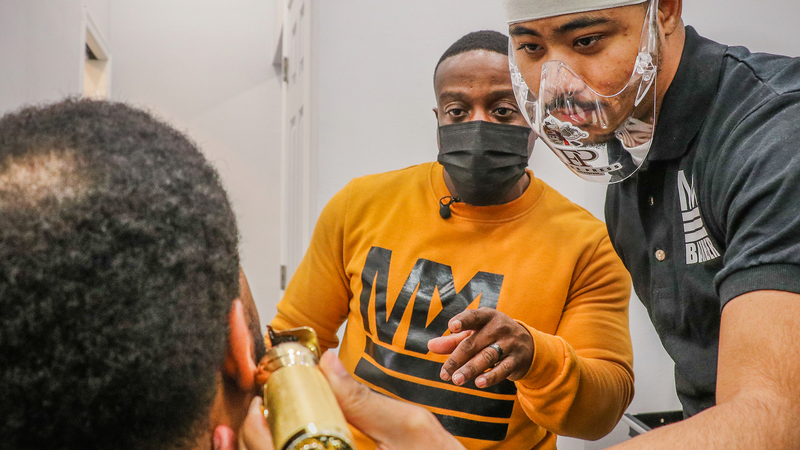 PHILADELPHIA, Pa. -- "I think that our city could benefit from our youth gaining skills," says barber Jamal Davis. "And for our team, its barbering."

Davis was born into a long line of barbers from West Philadelphia. Growing up, he remembers sweeping floors at his great uncle's shop.

"I always admired it, but I never knew that it could be a full-time thing," he said.

Davis created Maximum Level Groom and Beauty Salon, through which young men and women can learn to become barbers, bosses, and brand designers.

"I ultimately started to have young people around the community that will want to come in and work in the shop just like I did, how I started out," said Davis. "And that's how most of the relationships in this shop have started."

He calls it Magic Bootcamp.

As opposed to going to a trade school, interested individuals can enroll in a four-week-long course for $600.


"When I pursued the barber journey, it gave me a more positive and broader perspective," said 21-year-old Devin Cornitcher. "I honestly wouldn't know where I'd be without barbering, you know what I mean. Basically, it really humbled me a lot."

Davis mentorship started at an even earlier age for his son, Idrees.
"Just one day I was like, dad, I want to cut hair," said 10-year-old Idrees.

He recalls how satisfying it was to perform his first haircut and make his own money.


Davis thinks that building a better community can start with youth like his son.

"If something happens to me, he has a multitude of mentors out there that are going to make sure he's cool because I took the time to invest in them and they want to take the time to pay it forward to him," he said.