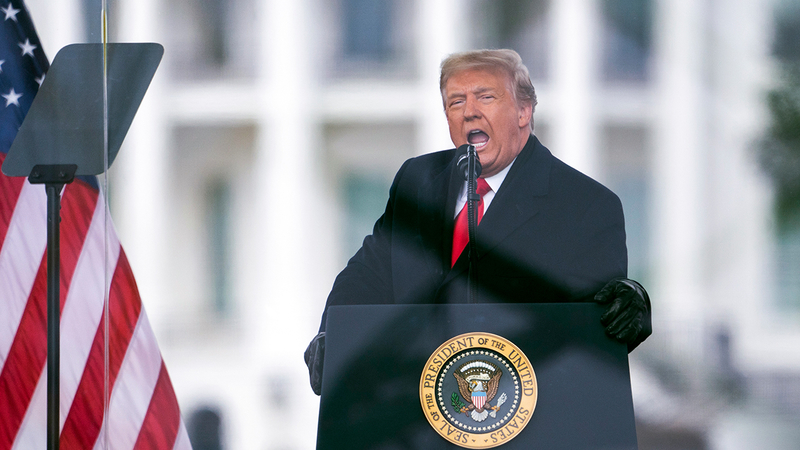 WASHINGTON -- The select committee investigating the January 6 riot at the US Capitol issued its first round of subpoenas Thursday, targeting close aides and allies of former President Donald Trump.

The subpoenas come as the select committee seeks to investigate efforts the Trump White House took to potentially overturn the 2020 presidential election and how the spread of misinformation fueled the anger and violence that led to the Capitol insurrection.

The former Trump staffers are being issued subpoenas for private depositions and records. All document requests are due by October 7.

The decision to call a group of Trump loyalists in front of the committee at this early stage demonstrates the direction of their investigatory process. The committee members have said they are very interested in what information was known within Trump's orbit about the planning leading up to the insurrection and decisions made that day.

"The Select Committee is investigating the facts, circumstances, and causes of the January 6th attack and issues relating to the peaceful transfer of power, in order to identify and evaluate lessons learned and to recommend to the House and its relevant committees corrective laws, policies, procedures, rules, or regulations," House Select Chairman Bennie Thompson, a Mississippi Democrat, said in a statement.

All four of the former Trump staffers were part of a larger records request the committee had sent to government agencies last month when it requested the records of hundreds of former Trump staffers, campaign employees and supporters who played a role in either spreading misinformation around the 2020 election results or the planning of the "Stop the Steal" rally that served as a prelude to the riot at the Capitol, as well as those who played a role in the security response that day.

The National Archives, which serves as the custodian of the Trump administration White House records, told CNN earlier Thursday that it had no comment on whether it had been contacted by members of Trump's orbit or the White House regarding executive privilege.

"We have no comment, no comment, since we consider the entire PRA notification process to be deliberative until a final decision is made," a spokesperson told CNN.

The subpoenas to the four Trump loyalists underscore an effort by the committee to understand what the former President knew in the lead up to January 6 and in its direct aftermath, based on those who were closest to him in that period of time. The information the committee is seeking also points to a clear interest in learning more about what Trump and those around him attempted to do to overturn the results of the 2020 presidential election.

In the letter to Steve Bannon, the committee cites communications he had with Trump on December 30, 2020, "and potentially other occasions" in which Bannon reportedly urged the former President "to plan for and focus his efforts on January 6." The committee also references Bannon's incendiary comments made on his podcast on January 5, in which he said "all hell is going to break loose tomorrow."

To Meadows, the committee wrote, "The investigation has revealed credible evidence of your involvement in events within the scope of the Select Committee's inquiry," citing his close proximity to Trump on the day of the attack.

The committee also said it is pressing to learn more about Meadows' efforts to aide in overturning the 2020 presidential election, and noted it has evidence that shows Meadows communicated with "the highest officials at the Department of Justice requesting investigations into election fraud matters in several states," citing documents it has received from DOJ.

The committee, citing documents it has obtained, told Patel "there is substantial reason to believe" that he has important insight and information into how the Department of Defense and White House prepared for and responded to the attack at the US Capitol. The committee also said it wants to learn more about the direct communication Patel had with Meadows on the day of the insurrection.

In its letter to Scavino, the committee said it "has reason to believe that you have information relevant to understanding important activities that led to and informed the events at the Capitol on January 6, 2021, and relevant to former President Trump's activities and communications in the period leading up to and on January 6th."

The committee also cites Scavino's long history of working for Trump as key to providing important insight into how the former President handled the January 6 insurrection and efforts to overturn the election. The committee also cited an example of Scavino's tweets that indicated he encouraged participants to "be a part of history" on the day of the riot.

This story is breaking and will be updated.