How we can use lessons learned from devastating Japan earthquake, tsunami to make SoCal safer 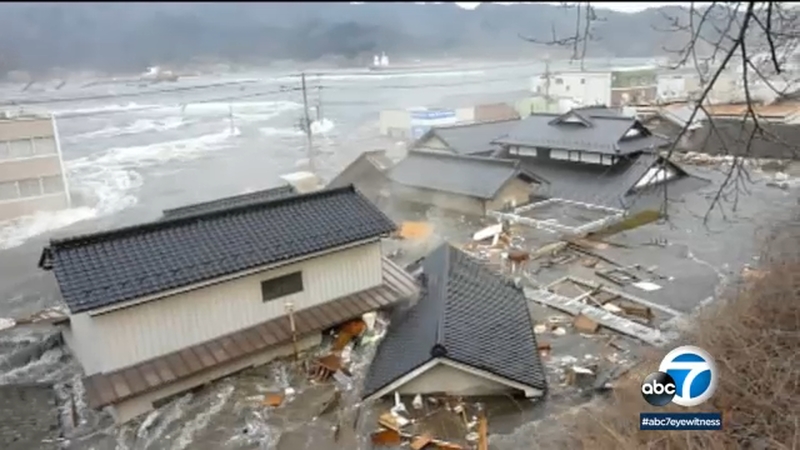 The Japanese earthquake and tsunami that devastated the island country 10 years ago is considered one of the most powerful natural disasters ever recorded.

Since then, experts have studied the event and have learned a lot.

In 2012, ABC7's David Ono traveled to Japan and met Kenji Saito, whose bakery in Ofunato was annihilated by the tsunami.

The shaking prompted by the magnitude 9.0 quake went on for minutes. Saito knew a tsunami was coming, so he ran to a hillside and recorded what he saw -- crackling lumber and rushing water.

In the video, you can hear Saito crying. Everything was gone, but it wasn't just Ofunato. The terrible scene played out in cities across Japan.

In a panel discussion put on by Japan House and Love to Nippon this week, renowned seismologist Dr. Lucy Jones and other experts discussed what we've learned over the past 10 years.

One thing is that Japan, as technologically advanced as the country is, never expected an earthquake and resulting tsunami of that size.

"That's the problem with this earthquake. Before it happened, most seismologists would have told you it couldn't happen," Jones said.

Deputy Chief Larry Collins saw the destruction firsthand. He remembers even the shelters that were meant to keep people safe were destroyed.

"I think some of the striking things we saw were the tsunami safe zones that themselves were wiped out," he said.

Another area that provided a false sense of security was the sea wall. In Ofunato, it was only eight feet tall. A new sea wall was later erected, standing 30 feet above sea level.

Dr. Jones says the shaking, not a tsunami, is the greatest threat to Southern California. The region has a different kind of fault and its residents live right on top of it.

"I"ll go ahead and say it. I'd rather be in a Japanese building than a California building. I think, in general, they've been built to higher standards," she said. "We could easily kill as many people in an earthquake as we lost in Japan in the tsunami."

In fact, when you consider earthquakes, floods and fires, FEMA says there is no city in the U.S. with a greater risk of a catastrophic event than Los Angeles. That's a fact. We have to learn about catastrophes in the past so they are not our future.
Report a correction or typo
Related topics:
southern californiaearthquakejapandisastertsunamijapan quake
Copyright © 2022 KABC Television, LLC. All rights reserved.
TOP STORIES
LA County could hit 'high' COVID level in July, prompt return of masks
Here's what to know about the end of CA's eviction moratorium
California late start law aims to make school less of a yawn
Woman searching for brother reported missing in Redondo Beach
Lawyer: Nipsey Hussle lifted up neighborhood he was gunned down in
Apple's newest CarPlay feature will make buying gas easier
How to save money when buying a new car in an inflated market
Show More
Orange County confirms 1st presumptive case of monkeypox
OC woman attacked and sexually battered inside Irvine storage facility
Silver Lake restaurant offers free food in exchange for Sriracha
USC, UCLA moving from Pac-12 to Big Ten in 2024
Slain El Monte officers: Honoring 2 loving fathers and valiant heroes
More TOP STORIES News