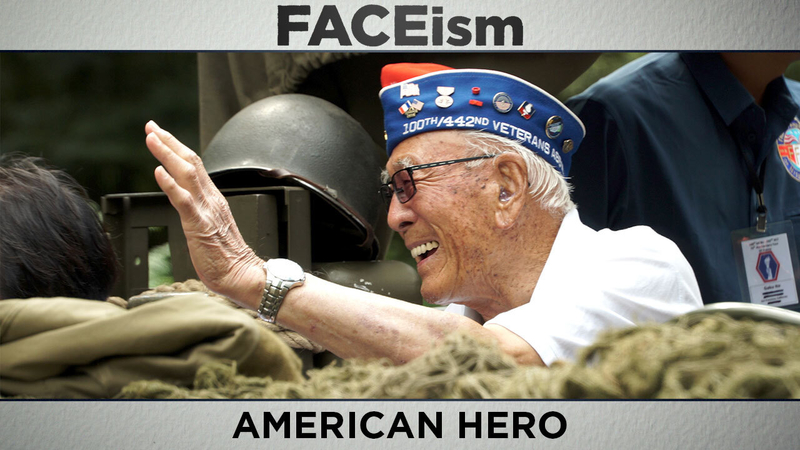 BRUYERES, France (KABC) -- World War II gave us some of the most difficult yet greatest lessons in history. And if we are paying attention, lessons that continue to teach.

Flying over the Vosue mountains of eastern France is a stunning sight. Inside the region's dense forest is a remarkable story.

To find it, ABC7 followed a vehicle: onboard, people in uniform, and a man with a giant smile.

When Lawson came to visit the picturesque village of Bruyeres, its citizens celebrated. There were parades, and Lawson led them.

But why does this 96-year-old Japanese American, who was born and raised in Montebello, mean so much to these French citizens?

Just before heading to France, ABC7's David Ono sat down with Lawson at his Bay Area home and he showed Ono a picture from October of 1944.

The photo shows a dashing, rugged, young man, the day before his 21st birthday. It was taken as he was about to go into the town where, today, he is so loved.

Lawson was part of the U.S. Army's 100th Battalion/442nd Infantry Regiment, often called Nisei. It was a segregated unit of Japanese Americans. Some fought even as their families were unjustly locked up in internment camps. Others were from Hawaii. Together they made up one of the toughest fighting units in U.S. history, driven by the desire to prove their patriotism.

Their mission was to liberate Bruyeres, one of the most beautiful French communities one could imagine. But in 1944 the town had been under Nazi control for five years, enduring horrible atrocities.

"We're going down both sides of the road and all of a sudden the Germans started firing," he said. "Well, the fire wasn't coming from the city where the buildings were -- it was coming from the hills."

The Germans were using the dense forests and the series of hills surrounding the town.

The Nisei would have to go into the dark, frightening woods and get them.

"Going through the forest was really horrible," Lawson recalled.

German artillery was adjusted to explode at the top of trees, so not only was the blast and hot metal deadly, but also the splintering wood. Lawson was hit.

It took 10 bloody days in the forest and the town to push the Germans out. Bullet holes still riddle the town's church.

The price was tragically high. The Nisei lost so much in that forest. "I" company was hardest hit -- going in with 187 men and walking out with eight.

Epinal Cemetery, just a short drive from Bruyeres, is where American heroes are laid to rest. In the 10 times Lawson returned, he always made it a point to visit his friends who never came home.

But there is an amazing byproduct to this tragedy. The citizens of Bruyeres, from the day they were liberated, said that they would never forget. And they haven't.

Schoolchildren are taught the story and care for their graves.

And perhaps the most incredible part: The soldiers driving the vintage vehicles are French citizens pretending to be the Nisei. They are re-enactors. There are hundreds of them. They have meticulously refurbished the vehicles left behind. They copy the Nisei's uniforms to the stitch. And the tradition is handed down with each generation.

There is no attention paid to the color of one's skin. It is only about the content of one's character.

And when the real Nisei veterans came to visit, it was a celebration.

But as the years go by, our heroes have disappeared.

Last summer, Lawson was the last one who could make the trip. And as he pulled away, waved and blew a kiss goodbye, it would be his last trip too.

Lawson passed away earlier this year, and with that, we lost one of the biggest smiles and greatest representatives of this amazing group of heroes.