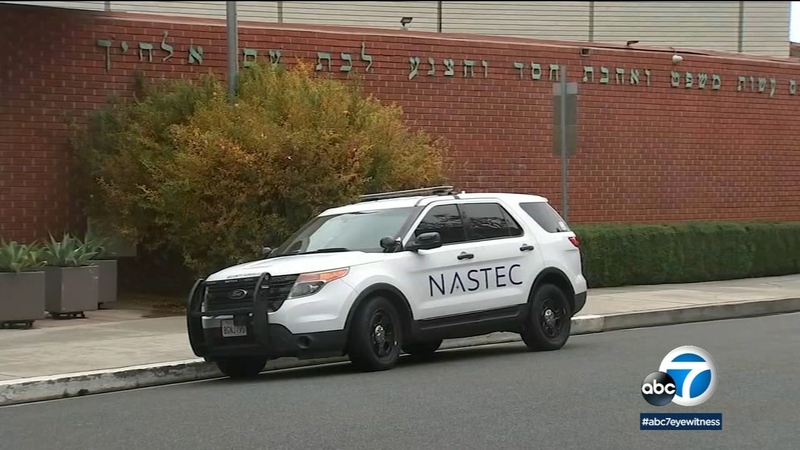 LOS ANGELES (KABC) -- When a terrorist interrupted a Shabbat service at Congregation Beth Israel in Colleyville, Texas last Saturday, taking four hostages, it was another reminder to Jews everywhere, including in Southern California about the rise in antisemitism.

"I stand up here before you with great gratitude just to be alive," said Rabbi Charlie Cytron-Walker, during an FBI press conference about the ordeal.

Cytron-Walker, the synagogue's rabbi, played a key role in the 11-hour standoff ending with all four hostages getting out alive.

"I think we can learn from the heroic actions of the rabbi who trusted his instincts on Saturday, and he relied on the critical security training that he and his congregants have received," said Kristi Johnson, the Assistant Director in charge of FBI Los Angeles.

The Jewish Federation of Greater Los Angeles says that they've been flooded with calls following Colleyville from the 300 institutions they serve about holding that same security training and having their locations assessed by security professionals -- efforts that will make the Jewish Community in Los Angeles safer.

Many of the Jewish institutions in Los Angles already have 24/7 security, but security is expensive, so following the hostage situation in Texas, the Jewish Federation of Greater Los Angeles is conducting an audit for better collaboration. It's an attempt to lessen the cost of security for all.

"We should live in a world where you can actually go in the front door instead of the side door, because the front door is the most inviting part of a temple instead of a side door, because it's the most secure part of a temple," said Rabbi Noah Farkas, president, and CEO of the Jewish Federation of Greater Los Angeles. "It's an unfortunate thing that Jews have to pay millions and millions of dollars to do what many people can do for free."

Jews are the victims of 60 percent of hate crimes in the U.S., according to the latest reports, and the FBI is treating Colleyville as a hate crime committed by a terrorist who had an antisemitic view of the world, and intentionally targeted that congregation.