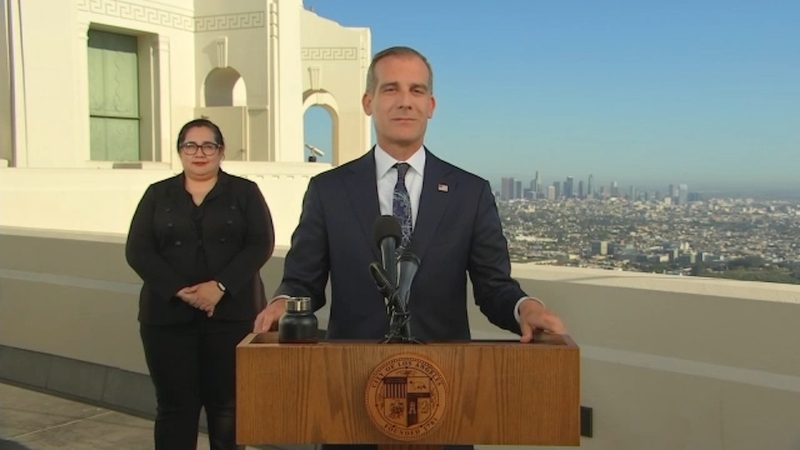 LA Mayor Garcetti nominated to serve as ambassador to India

LOS ANGELES (KABC) -- Los Angeles Mayor Eric Garcetti has been nominated by President Joe Biden to serve as U.S. ambassador to India, the White House announced Friday, selecting a high-profile ally to serve in one of the most difficult diplomatic posts.

Garcetti, if confirmed, would be dispatched to India as it has been overwhelmed by a surge in coronavirus infections and deaths.

Shortly after the nomination was announced, which had been speculated on for months, the mayor described how he felt when he got the call.

"It was like an angel coming and saying 'this is what you're supposed to do next.' I've always been a big believer in instinct, when something feels right it feels right, and this feels right," he told Eyewitness News. "This feels like the right moment for L.A. to start its next chapter and also the right moment for us to make sure America can stand up strong, everywhere in the world, and in doing so make L.A. stronger, too."

His existing term as mayor runs through December of 2022. If confirmed, Garcetti would resign and City Council President Nury Martinez would serve as acting mayor until the council appoints an interim mayor. Garcetti and councilmembers say they feel like a special election would be too costly.

Garcetti, who considered a 2020 White House bid and later became part of Biden's inner circle, emerged as a widely discussed possibility to join Biden's Cabinet last year. But he took himself out of the running, saying the raging coronavirus crisis made it impossible for him to step away.

The two-term mayor would leave L.A. with an uneven record. He has been credited with continuing a transit buildup in a city choked with traffic, establishing tougher earthquake safety standards for thousands of buildings and steering the city though the deadly pandemic as it became a hot spot for infections. Cases have fallen steeply in the city and some restrictions have been rolled back, consistent with the trajectory in the state.

But Garcetti was overmatched by a crisis of homelessness that became a national embarrassment despite the massive jump in government spending to fight it. Many streets and sidewalks remain cratered and crumbling, despite his early pledge to make fixing them a cornerstone of his administration.

A lawsuit alleges that a former top staffer sexually harassed one of the mayor's police bodyguards while Garcetti ignored it or laughed it off. The mayor denies the claims. One of his former deputy mayors was also indicted on corruption charges in an ongoing federal investigation at City Hall. And as is the case in many large cities, the crime rate in LA is spiking.

Garcetti says he expects tough questions, including about his former deputy chief of staff Rick Jacobs, but isn't concerned about the confirmation process and doesn't feel he's leaving the city in bad shape.

"We haven't solved every problem, we never can - traffic, homelessness - those things predate and will postdate me, but we've made progress on everything and most importantly, I believe we built the city of the future. When you look at those next seven years that are coming leading up to the Olympics, this is going to be a city you should never bet against. This is a temporary posting. I have a permanent assignment and that's called Angeleno."

In picking Garcetti, Biden is rewarding a loyalist who was one of his national campaign co-chairs, who served on the committee that vetted his pool of vice presidential contenders and who served as one of several co-chairs for Biden's inaugural committee.