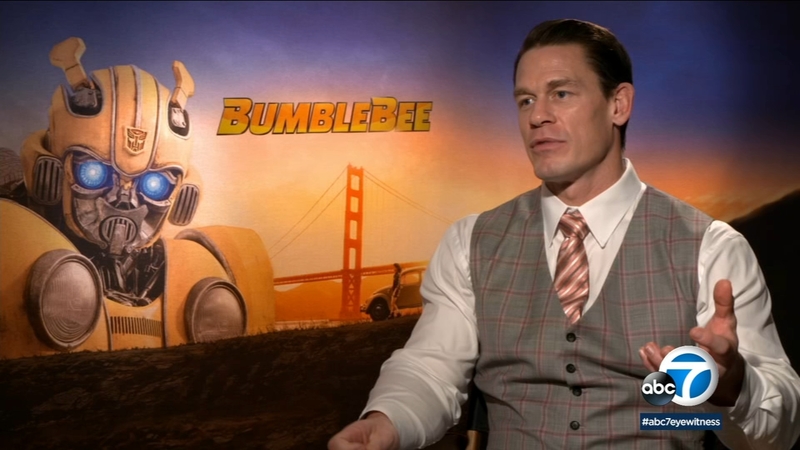 LOS ANGELES -- "Bumblebee" tells the story of two very different "beings" who find each other at the time when each is in desperate need of a friend.

The teenage girl, played by Hailee Steinfeld, and the robot from outer space she nicknames "Bumblebee" are both simply misunderstood.

John Cena plays a high ranking military officer who will stop at nothing to bring Bumblebee under his control.

"It's a great set of circumstances where these two personalities are joined together, both going through the same problem, just through a different lens and I think that's what is really powerful about the movie," Cena said. "You can harken it back to like 'E.T.' It's the same sort of concept about those misunderstood, who crave friendship and a shoulder to lean on."

This is the sixth live action movie in the "Transformers" franchise, and Cena is confident the film offers something for everyone.

"I don't think it trashes the installments before it - it pays wonderful homage. There's enough 'Transformers' for die-hard fans to be satisfied, but enough for an average moviegoer to sit down and be entertained by a great movie," he said.

In a few scenes, Cena's character has the full force of the military backing him up. To make sure the scenes rang true, they hired the real deal as extras.

"Behind us, starting in the rank and file, are all veterans," Cena said. "And it was great to have them on set, to talk to them, and listen to how they're pursuing their dreams, talk about where they've been, where they are, where they want to go. Normally around a movie when they're setting up shots, it's a lot of time. It never felt arduous, it was always really cool information."
Report a correction or typo
Related topics:
arts & entertainmentcelebritymoviemovie theatermovie newsjohn cenahollywood wrapmovie sequels
HOLLYWOOD WRAP
Tanya Roberts still alive, rep says day after reporting her death
Action star Jet Li learns to sit still for Disney's 'Mulan'
Bryan Cranston stars in 'The One and Only Ivan' from Disney+
'Stage Mother' with Jacki Weaver offers message of redemption
TOP STORIES
1 killed in fiery multi-vehicle crash on 105 Freeway in Paramount
Nurse dies days after being attacked at DTLA bus stop
Stafford, Murray seek first playoff wins when Cardinals visit LA
SoCal coastal areas see damage from tsunami surge
3 people killed after car flies off 210 Freeway in Pasadena
18K ancient Saudi Arabian tombs discovered along 4,500-year-old road
Expect more worrisome COVID variants after omicron, scientists say
Show More
Legendary KABC Radio host Michael Jackson dies at 87
Celebrated Tuskegee Airman Charles McGee dies at 102
Lori Loughlin, Mossimo Giannulli's Hidden Hills home burglarized
FBI identifies hostage-taker at Texas synagogue
LA County reports 53 new COVID deaths, 43,883 more cases
More TOP STORIES News