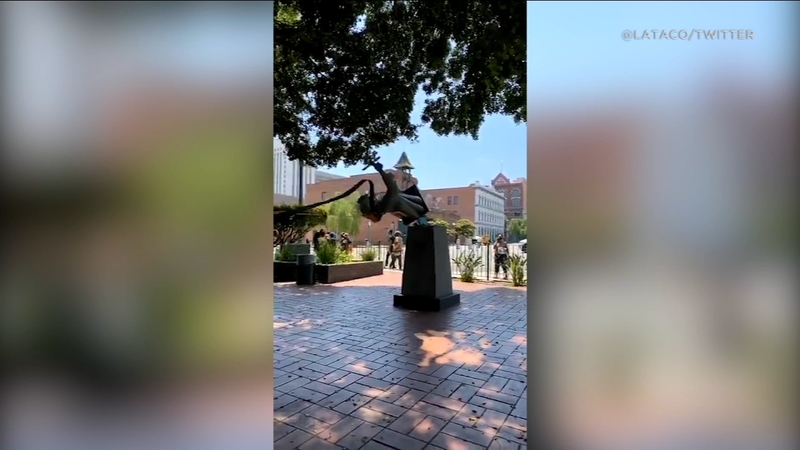 DOWNTOWN LOS ANGELES (KABC) -- Activists on Saturday toppled a statue of Junipero Serra, widely regarded as the founder of the California Missions, from its perch on Olvera Street in downtown Los Angeles.

Video footage tweeted by local news outlet L.A. Taco captured a group of demonstrators hauling down the controversial statue with a rope around its neck. The hands and head of the statue were seen covered with what appeared to be red paint.

"Natives just tore down the statue of Junipero Serra at Placita Olvera in solidarity with #BLMprotest #antiracism #antislavery," the tweet read.

Serra was an 18th Century Franciscan priest responsible for founding nine of the 21 Catholic missions in California with the aim of bringing native peoples into the fold. The assimilation and exposure to foreign diseases ultimately led to the destruction of indigenous tribes across the region.

Community activist Joel Garcia said the statue of Serra was targeted because it represents mass incarceration.

"Mass incarceration, as it exists now, began with the Mission system and California has its own legacy of slavery," Garcia said. "The legacy of policing that we see now began through the mission system so it's important to reconcile with that, to understand that, the Serra statue represented all of that."

Pope Francis is expected to canonize an 18th-century Franciscan friar who founded the first nine Spanish missions in California, despite backlash from the Native American community.

Pope Francis canonized Serra back in 2015, which was met with backlash from the Native American community.

In San Francisco, demonstrators also tore down statues or busts of Ulysses Grant, the missionary Serra and Francis Scott Key, who wrote "The Star Spangled Banner" and was a known slave holder.