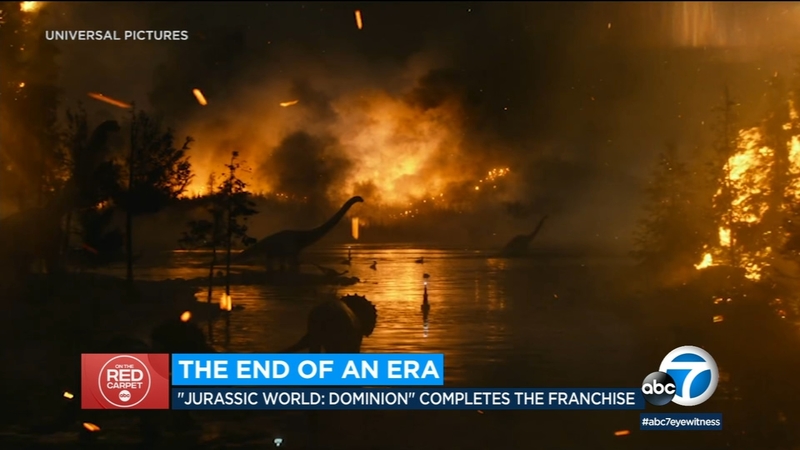 HOLLYWOOD, LOS ANGELES -- The summer of 2022 is already flying high at the movie box office. Memorial Day started us off with "Top Gun: Maverick," and we'll soon be trounced by the dinosaurs of "Jurassic World: Dominion."

It all began in 1993 with "Jurassic Park." And now the film's original stars, Sam Neill, Laura Dern and Jeff Goldblum, join the franchise's most recent cast and director Colin Trevorrow for its conclusion in "Jurassic World: Dominion."

"The reason why these movies have lasted so long is because we saw them when we were kids and we loved them when we were kids," said Trevorrow. "And so I wanted to make something that families can go to together, that does have moments that are genuinely scary but that also, like, won't necessarily scar kids for life."

Isabella Sermon is the film's youngest star...and that had its advantages!

"I think one of the things that I loved about this film was that there's not really, like, a main character. It's just like a huge core cast. And I think that was really great for me to kind of work with so many people at such a high standard all at once. And I feel like I just learned so much from everyone in the cast," said Sermon.

The franchise's original stars don't come back just to make cameos - they are in it all the way. Moreover, they say it was a blast to help say goodbye.

"We're hoping that people get a big kick out of just this and it is--it is a thrill a minute kind of thing, isn't it?" said Goldblum. "Then it goes all over the world and then kind of wraps itself up in a pyrotechnical and delightful way, I think."

When the cast was invited to see the finished product, Dern says a good time was had by all! "We were screaming. We were laughing hysterically. We were cheering for all the characters. Every dinosaur was just mind-blowing because, of course, like any audience, we're seeing something for the first time. Some of these guys we met on set. But we had the time of our lives. So we sure hope everybody else does."

"Jurassic World: Dominion" is rated PG-13 and is in theaters Friday, June 10.