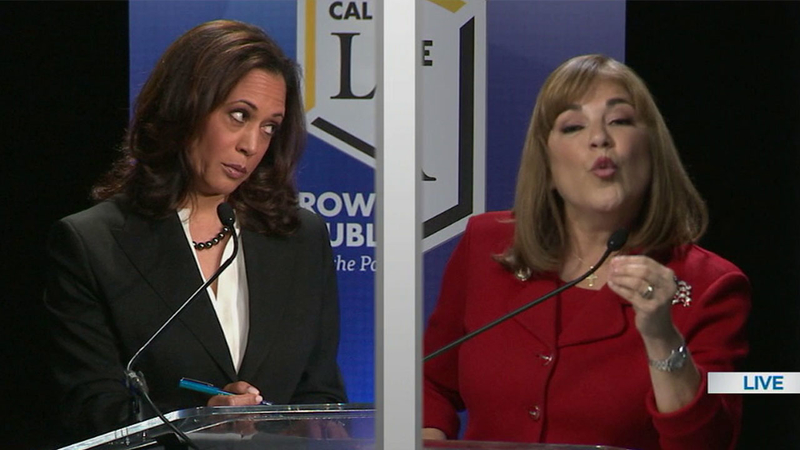 LOS ANGELES (KABC) -- Sen. Kamala Harris was announced Tuesday as former Vice President Joe Biden's running mate. Here's a look back at her performance during the only televised debate for California's open Senate seat in 2016.

The article below was published on Oct. 5, 2016. The debate aired exclusively on ABC7 and was sponsored by the Pat Brown Institute for Public Affairs at Cal State LA, KABC-TV and the League of Women Voters of California Education Fund.

Harris has already won the support of the Democratic establishment, with endorsements from President Barack Obama and Gov. Jerry Brown.

As the underdog in polling and fundraising, Sanchez took the more aggressive tone, saying Harris was ill-equipped to take on global challenges on terrorism. She also portrayed Harris as an untrustworthy politician who "says one thing and does another."

Sanchez added that as the state's top law enforcement officer, Harris has failed to protect Californians.

Harris in turn, criticized Sanchez's voting record. She said she was rated the third most truant Congress for missing votes and committee meetings.

"My opponent does not show up," Harris said. "The reality is you can have a lot of stamps on your passport, but you gotta show up."

Sanchez, who has been in Congress representing Orange County for nearly 20 years, said in her first 18 years she had a 95 percent attendance record but acknowledged it has now fallen to around 68 percent.

"But I have never missed a close crucial vote."

The contest came just a few days before mail-in ballots are distributed to millions of voters.

As fellow Democrats, the two candidates share similar positions on many issues, including the $15 minimum wage, climate change and immigration reform.

The race has generally been overshadowed publicly by the presidential campaign, with little public advertising by Sanchez or Harris.

Sanchez has struggled to raise money and is trying to form a coalition with appeals to Republicans, Latinos and Southern Californians in addition to the state's Democratic voter base.

Harris also criticized Sanchez for comments about Muslims and terrorism. In December, about a week after the San Bernardino shootings, Sanchez suggested that as many as two in 10 Muslims would engage in terrorism to establish a strict Islamic state.

She later issued a statement saying the estimate did not reflect her views on the Muslim community in America, and that most Muslims around the world are committed to peace.

During the debate, Harris said such comments play into the hands of ISIS, encouraging their recruiting efforts.

Sanchez replied: "First of all, that is completely false."

"Sometimes you say something that your opponents purposely use politically against you. They misconstrue it. And that's what Miss Harris and all of her cronies have been doing."