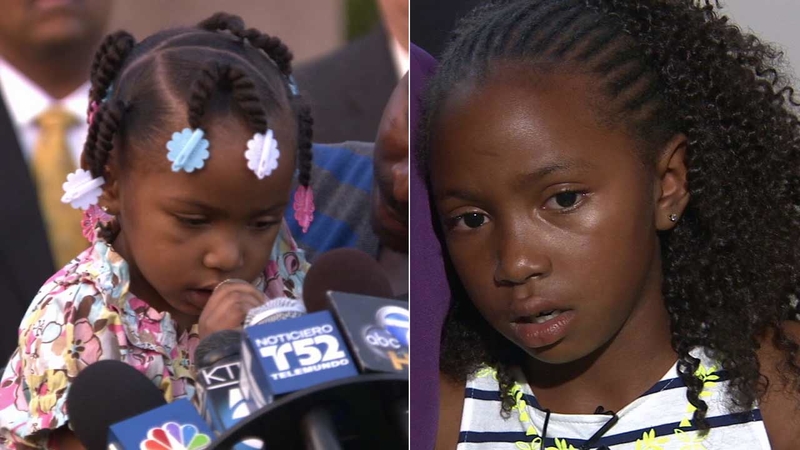 LOS ANGELES (KABC) -- Trial is set to begin Tuesday for two suspects accused of shooting a 25-year-old mother in front of her 3-year-old daughter on Christmas night in South Los Angeles in 2010.

"The only thing I can pray to God is to continue to give me the strength to be able to deal with it," said Kim Evans, the victim's mother.

Her daughter, Kashmier James, was shot and killed in the 1700 block of W. 85th Street in Manchester Square. James' daughter, Neveah, was sitting in the backseat of the family car when she was killed.

Darnell Deshon Houston, Lamar McKnight and Ezekiel Simon, 16, were later arrested for James' murder. Police believe all three gang members had mistaken James for someone else on the night of the shooting.

Houston and McKnight are expected to appear in court Tuesday to face trial in connection with the murder.

Seldom does Eyewitness News interview a child who's a victim of crime, but Neveah and her grandmother say they want people to know their story and how through the tragedy, they are determined to triumph.

James became a nurse because she wanted to help people. In that spirit, her family launched the Kashmier James Foundation to save troubled youth. The foundation is working to partner with schools in South L.A.

"Instead of suspending the kids or expelling them out of school, they will give them to us for six months," Evans said.

"I don't want you guys to ever hide anything about my mommy. I want to know," Neveah told her family last year.

In a rare move, it's expected the 8-year-old will testify during the murder trial.

Aside from that, Evans and Neveah want to move on. Neveah says she has plans to help her mom's foundation and give from her gifts.