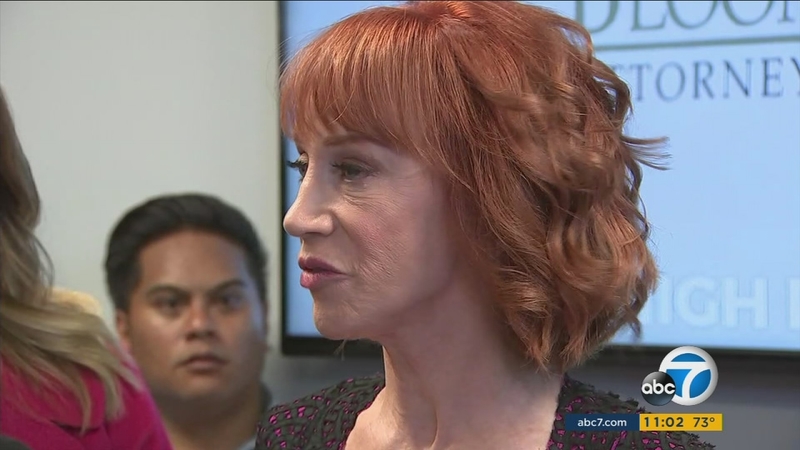 WOODLAND HILLS, LOS ANGELES -- Embattled comedian Kathy Griffin says she's not afraid of Donald Trump and plans to keep making fun of him but maintained that she's sorry for a video that depicted her holding a likeness of the president's severed, bloody head.

At a rambling press conference Friday, Griffin tearfully predicted her career is over and said Trump "broke me." Since the video was posted Tuesday, she has lost her job co-hosting CNN's New Year's Eve special and had at least four comedy shows canceled. Trump, first lady Melania Trump and Donald Trump Jr. have publicly criticized the video.

Kathy Griffin and her attorney held a news conference Friday to discuss the fallout from the comedian posing with a likeness of President Donald Trump's severed head.

Griffin, who asserted that she has been contacted by the Secret Service, said the Trumps are "trying to ruin my life forever."

Griffin, 56, repeated her claim that the video was a parody, meant as a pointed comeback to Trump's remark last summer that former Fox News Channel personality Megyn Kelly had "blood coming out of her eyes, blood coming out of wherever."

Griffin's attorney Lisa Bloom said the comedian has a first amendment right to make fun of the president.

"Whether or not you get, or like, her artistic expression, in America, Kathy has the right to parody the president," Bloom said. "She never imagined it would be misinterpreted as a threat of violence against Trump."

Bloom, a former truTV anchor and lawyer Gloria Allred's daughter, has represented Wendy Walsh, who has accused former Fox News Channel personality Bill O'Reilly of hurting her career after she spurned his advances. O'Reilly has denied the accusations.

Backlash against Griffin has continued to grow with at least four theaters announcing Thursday that they had canceled her performances after the comedian posed with a likeness of President Donald Trump's severed head.

Venues in New Jersey, New York and Pennsylvania canceled November shows. The Community Arts Theater in Williamsport, Pennsylvania, posted on its website that the show had been dropped "due to the recent controversy surrounding Kathy Griffin and the concern for the safety and security of our patrons and staff."

"After hearing from many Minnesotans who were rightfully offended, I've come to the conclusion that it would be best for her not to participate in the event we had previously scheduled," the Minnesota Democrat said Thursday, a day after he had said she was still welcome. "I understand why Minnesotans were upset by this, and I take that very seriously."

He said what Griffin did "was inappropriate and not something that should be anywhere in our national discourse."

Earlier this week, CNN said Griffin would no longer co-host its live New Year's Eve special from Times Square, a gig she'd had for more than a decade, and another show was canceled at a New Mexico casino. An endorsement deal with Squatty Potty also ended.

Though Griffin apologized within hours of the images appearing online Tuesday, they were met with swift and widespread condemnation.

Trump later tweeted that Griffin "should be ashamed of herself" for posting the images.