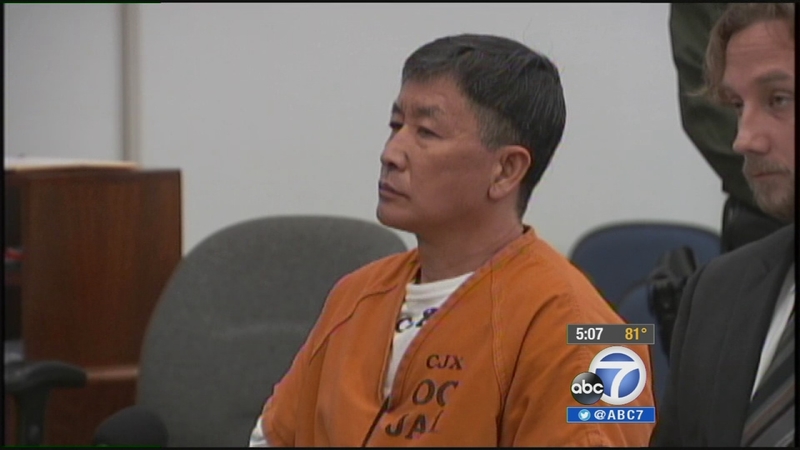 KC Joy gets 15-to-life in prison for Ramos murder

SANTA ANA, Calif. (KABC) -- Orange resident K.C. Joy was sentenced to 15 years to life in state prison Friday for the 2013 murder of roommate Maribel Ramos. Her body was found in a shallow grave in Silverado Canyon.

Kwang Chol Joy, 55, was convicted in July on one felony count of second-degree murder in the killing of Ramos, 36, a U.S. Army veteran who served two combat tours in Iraq and an active student at California State University-Fullerton. Joy murdered Ramos sometime between May 2 and May 3, 2013, and disposed of her body in the canyon, the Orange County District Attorney's Office said.

Joy and Ramos argued on May 2, 2013, about rent. Ramos told Joy to move out of their shared Fullerton residence because he wasn't paying his rent. Ramos was last seen alive that night on surveillance video dropping off a rent check at her property manager's office. Friends reported her missing the next night when she missed scheduled events.

Joy conducted Internet searches on May 16, 2013, at the Orange Public Library about human body decay, and used a satellite map to zoom in on a location near Santiago Canyon and Jackson Ranch roads after seeing a post about an "awareness walk" for Ramos on Facebook, according to the OCDA's Office. Orange Police investigators searched the indicated area later that day and found Ramos's body.

Ramos's cause of death was never determined due to the state of decomposition of her body. Joy was arrested on May 17.

Ramos's family were tearful in the courtroom before Joy was sentenced Friday.

"Mr. Joy needs to be put away for life. He is an evil man and a coward that should never be forgiven," said a family member in court.

Prosecutors alleged that Joy was in love with Ramos, who did not feel the same way about him.

Joy maintained his innocence moments before hearing his sentence on Friday. His request for a new trial was denied.

"Family wants me to apologize, which I cannot apologize for something I haven't done," said Joy. "Maybe someday truth will come out, maybe I'll just die inside prison."