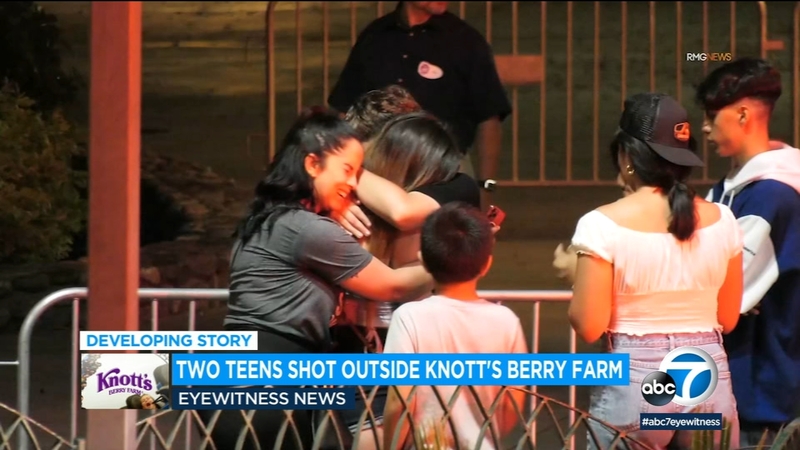 Knott's Berry Farm to reopen after nearby shooting injures 2 teens

Buena Park police said the teens were wounded near the entrance just before 8:30 p.m. Friday. Multiple shots were fired, according to police.

The incident triggered panic inside the park, with guests rushing for the exits over fears of an active shooter. Video from the scene showed guests running as word trickled that there may have been a shooting nearby.

"Everyone was like, 'run, run, run!' Everybody started panicking," said Melody Padilla of Hacienda Heights. "Kids are getting lost. It was scary because we didn't know what was going on."

Footage posted on social media showed some people hiding inside buildings at the park and barricading doors.

The Buena Park Police Department tweeted shortly before 9 p.m. that there was no active shooter threat in the area. The police department said both shooting victims were in stable condition.

"We have been made aware of an incident which took place away from Knott's Berry Farm," the park said in a social media post. "A victim was assisted by park personnel outside of the park's gates and transported to a local hospital. The incident is currently being investigated."

According to the Orange County Fire Authority, three patients - who weren't wounded by gunfire - suffered unspecified minor injuries as they tried to leave the park.

Knott's Berry Farm tweeted a statement about the incident.

One family told Eyewitness News they lost their little girl during the chaos but eventually found her safe and unharmed.

Details regarding a suspect or suspects were not immediately available.

Anyone with information on the shooting is urged to call Buena Park police at 714-562-3901.