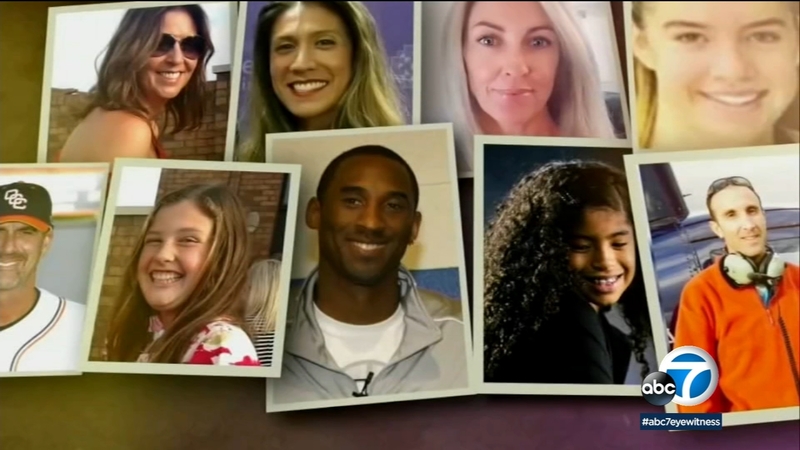 On the 2nd anniversary of the Kobe Bryant crash, trial nears

LOS ANGELES (KABC) -- Wednesday marks two years since the helicopter crash that claimed the lives of Lakers legend Kobe Bryant, his daughter Gianna and seven others.

The group was headed toward Thousands Oaks for a youth basketball game when their helicopter crashed in the hills above Calabasas.

The National Transportation Safety Board pinned the crash on pilot error, saying Bryant's pilot became disoriented and lost control while flying through cloudy conditions the morning of Jan. 26, 2020.

In the days that followed, a massive memorial surrounded what was then Staples Center and murals of Kobe popped up across the city. Laker fans in Southern California and around the world felt a collective grief.

But perhaps no one was more impacted the loss than the victims' families who knew and loved them.

Christina Mauser was among those killed in the crash. Her husband Matthew reflected on losing her.

"This year's been a little easier. Each year has gotten a little bit less intense... you have your good moments and you have some rough patches," he said.

Since then, the crash has resulted in a push for new safety standards for helicopters and a number of lawsuits, including one brought forth by the NBA legend's widow against Los Angeles County.

Vanessa Bryant is seeking millions of dollars in damages for the emotional distress she claims suffering over pictures that were taken by first responders at the crash scene and shared by L.A. County sheriff's and fire department personnel.

Earlier this month, the county tried to have the case dismissed, but the judge disagreed, allowing for the case to move forward.

County attorneys say it will be proven to a federal jury that no photos taken by personnel at the scene were ever shared with the public.

"The fact remains that the County did not cause Ms. Bryant's loss and, as was promised on the day of the crash, none of the County's accident site photos were ever publicly disseminated," according to a lawyer for L.A. County. "The County did its job and looks forward to showing that at trial."

Bryant's attorneys allege that close-up photos of the remains of the basketball star and his 13-year-old daughter, Gianna, were passed around on at least 28 Los Angeles County Sheriff's Department devices and by at least a dozen firefighters in the hours after the accident.

"And that was only the beginning," according to the plaintiff's court papers. "The gratuitous sharing continued in the following days and weeks and included such outrageous conduct as flaunting the photos in a bar while pantomiming dismemberment and showing off the photos over cocktails at an awards gala."

The county maintains that the digital images were never publicly disseminated in any fashion - so the widow's claim of having to fear the photographs surfacing does not constitute grounds for her suit.