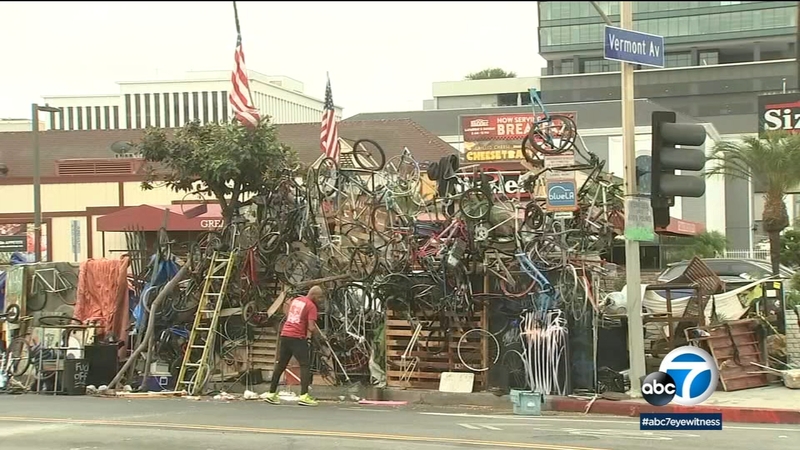 KOREATOWN, LOS ANGELES (KABC) -- Over the past nine months, artist Mohammad Natsche has turned the corner of W. 4th Street and Vermont Avenue in Koreatown into an art installation made up of bikes he's collected while living on the street.

"I am not homeless. I am actually, I would say, I'm here with this piece of art. Call it homeless, call it whatever you want to call it," Natsche said.

"Slowly, slowly people are like, 'Man, this is really nice, what are you doing? Why are you leaving the bikes outside? People are going to steal them.' I'm like let them steal it. It's OK. Everybody likes it, so it makes me really feel good," Natsche said.

Homeless encampments aren't meant to be permanent, but as the bikes get higher and higher, connected together forming a structure more stable than it looks, some residents and business owners are worried the 50-person encampment isn't going anywhere.

"For their own safety, they're not safe. Anything can happen to them. Nobody cares about them. But the city is responsible. They have received the money already to help them and they haven't done anything," said Felix Guevara, who lives near the encampment.

Mi Kim, who owns a business next to the encampment, said she feels sorry for people living at the encampment and tries to help them by offering water. But she is also frustrated and says they urinate and defecate near her shop.

Jamie Penn works with Koreatown's homeless population and says the best thing the city can do would be to provide housing, something that's been offered, according to Councilmember Mitch O'Farrell's office. Penn admits the towering bikes pose an issue.

"It's interfering with signage and things ... I acknowledge the public safety element to where this particular art exhibit is starting to step outside the lines," said Penn.

O'Farrell's office says the homeless who live at the encampment have been engaged over 50 times, including being offered housing. They also say the department of sanitation will service the encampment soon.