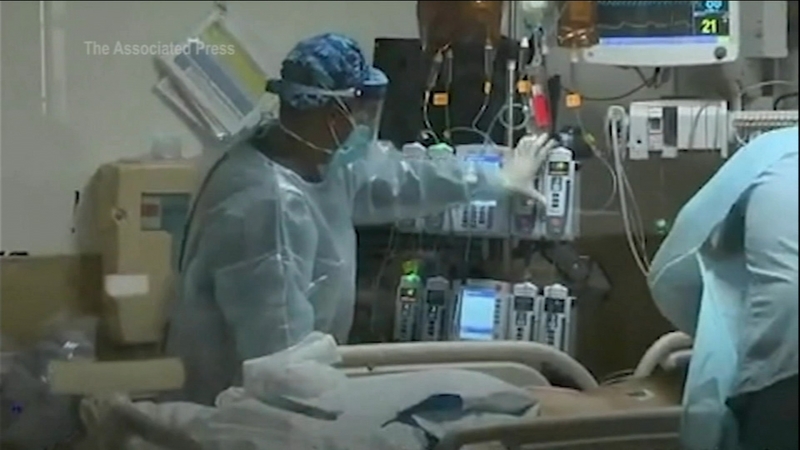 LOS ANGELES (KABC) -- Hospitals in Los Angeles County that are struggling to provide enough oxygen for the sickest coronavirus patients received some relief Saturday when the U.S. Army Corps of Engineers crews arrived.

Gov. Gavin Newsom's office says crews arrived at some of the aging hospitals to update their oxygen delivery systems.

The collaboration comes as the hospitals struggle to maintain oxygen pressure while treating an unprecedented number of patients with respiratory issues. Besides the shortage of oxygen, they're also having difficulty keeping up with demand for oxygen tanks for discharged patients to take home.

"By working to upgrade challenged oxygen delivery systems at these older hospitals we can improve the ability to deliver life sustaining medical care to those who need it,'' said Mark Ghilarducci, director of the Governor's Office of Emergency Services.

"The current surge of patients ... it's kind of a hidden disaster,'' Cathy Chidester, director of the county Emergency Medical Services agency, said earlier this week. "It's not a fire. It's not an earthquake. It's not a train wreck that's right in the public view and they can see what is happening and they can avoid that area. It's all happening behind the doors of households and hospitals. So nobody is really, the general public, is not really seeing what is going on.''

Chidester said there are reports of hospitals being so overwhelmed that ambulances are waiting seven or eight hours in emergency bays, forcing patients to be treated in the ambulance. But more importantly, the delay is keeping the ambulances out of service, leaving them unable to respond to additional emergency medical calls, she said.

"We're running out of ambulances, and our response to 911 calls is getting longer and longer,'' Chidester said.

She said in the Antelope Valley, the county is using ambulances and ambulance companies "that are not traditionally 911-response ambulances'' just to keep up with the demand.

The extra help comes at a critical time, as health officials fear a second surge is likely on the way.

"Really, the solution for the hospital care system is for people to stop transmitting the virus to each other, and this is going to be more important than ever as people are coming back from their holiday," said county Public Health Director Dr. Barbara Ferrer.

California started the new year on Friday with a record 585 coronavirus deaths in a single day. The state Department of Public Health on Saturday reported more than 53,341 new confirmed cases, bringing the total to 2.3 million.