2 LA County deputies in stable condition after being shot in Compton; search for gunman continues 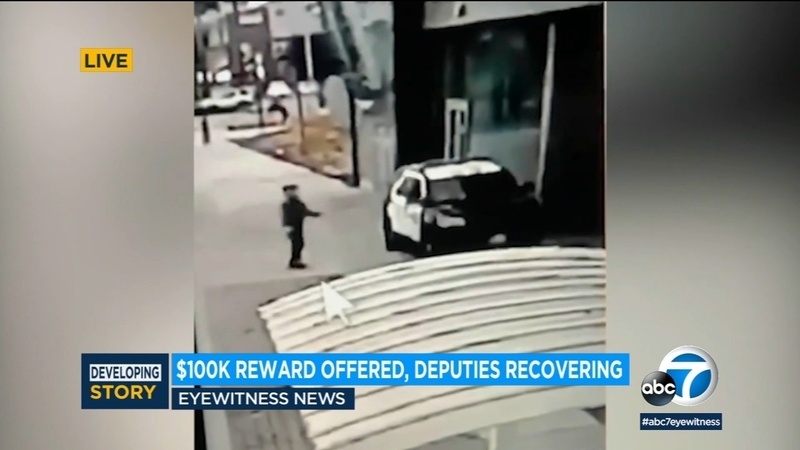 Both deputies shot in Compton ambush now in stable condition

COMPTON, Calif. (KABC) -- The two Los Angeles County Sheriff's Department deputies who were shot in the head in an ambush in Compton Saturday are now in stable condition, authorities confirmed Sunday.

A senior official within the department tells ABC News that one of the deputies, only identified as a 31-year-old mother of a 6-year-old boy, was shot in the jaw and arms but is critical but stable condition.

The other deputy, a 24-year-old man, was struck by gunfire in the forehead, an arm and a hand. He is described as alert. Neither of their names have been released to the public. Both deputies were sworn in 14 months ago.

GOFUNDME: An account has been established by a department deputy working with the union to raise funds for the wounded deputies. The GoFundMe page raised more than $140,000 in its first 24 hours.

Meanwhile, the search continued Sunday for the gunman who shot at the deputies Saturday as they sat in a patrol vehicle outside the Metro Blue station at Willowbrook Avenue and Compton Boulevard.

The department later announced a $100,000 reward for any information leading to the gunman's arrest.

Surveillance video shows the man approaching the window on the passenger's side and firing several times at close range. The suspect then ran off on foot. One deputy was seen emerging from the passenger side and stumbling around on foot for several seconds before the video ends.

"That was a cowardly act," Villanueva said. "The two deputies were doing their job, minding their own business, watching out for the safety of the people on the train."

"To see somebody just walk up and start shooting on them. It pisses me off. It dismays me at the same time. There's no pretty way to say it."

Outside St. Francis Medical Center in Lynwood where the injured were being treated Saturday night, a small crowd, including some apparent demonstrators, gathered. Witnesses say members in the group were chanting anti-law enforcement slogans and at one point tried to get inside the hospital.

Shortly after that, a local public radio reporter was pinned to the ground by deputies and arrested.

President Donald Trump and Compton Mayor Aja Brown were among the first public officials to come forward with reaction statements to the shooting on social media.

Gov. Gavin Newsom condemned the ambush shooting as a "cowardly, horrific act" and offered prayers for the recovering deputies.

Democratic presidential candidate Joe Biden tweeted: "This cold-blooded shooting is unconscionable and the perpetrator must be brought to justice."

Officials were not able to get a detailed description of the shooter other than a man. Officials cautioned that the surveillance video released from the scene uses a fish-eye lens so the suspect's height and weight may be slightly distorted.