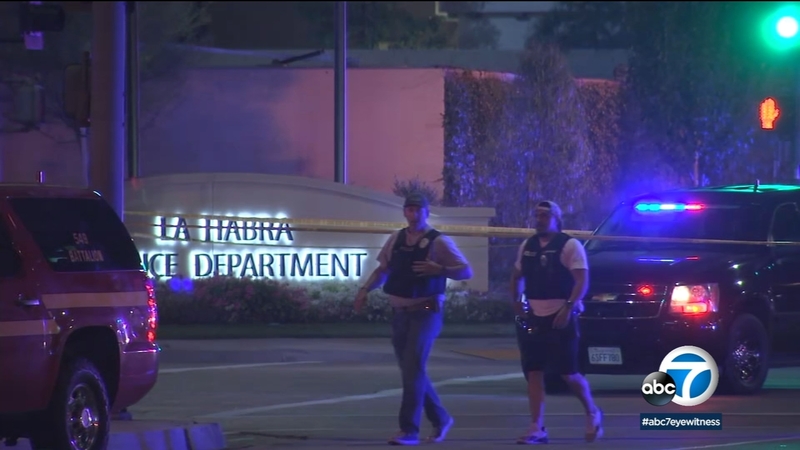 LA HABRA, Calif. (KABC) -- A police officer was struck by gunfire and a suspect was killed following a shootout in front of the La Habra Police Department station Friday evening.

The police officer was listed in critical, but stable condition after he was rushed to UCI Medical Center.

Councilmember James Gomez said in a video posted to Facebook that neighbors in the area reported hearing shots fired, and an investigation was underway. Gomez confirmed the suspect was killed.

The shooting happened just after 7 p.m. during a confrontation outside the front door of the police station at 150 N. Euclid Street.

According to La Habra police, officers responded to a disturbance call and once they arrived the shooting occurred. Further details about the shooting were not disclosed.

Video from the scene showed several police vehicles spread out across the area as a large perimeter was established around the police station. Crime scene tape cordoned off the area, and a tent was seen covering the male suspect's body.

Footage from AIR7 HD captured what appeared to be gun on the street. Police said a firearm was recovered and there are no other outstanding suspects.

The identities of the suspect and the wounded police officer were not immediately released.


Report a correction or typo
Related topics:
la habraorange countydeadly shootingpolice shooting
Copyright © 2021 KABC-TV. All Rights Reserved.
TOP STORIES
Search resumes for Brian Laundrie in Gabby Petito case
Heat advisories issued for most of SoCal on first day of fall
Movie and film workers might be headed toward a strike
California struggles to conserve water amid historic drought
Growing scam targets Bank of America and Zelle customers
Woman safe after video of possible abduction in Bell Gardens
FDA expected to authorize limited wider use of Pfizer booster
Show More
Who is running for mayor of LA? Here are the top contenders
Anti-Black bias events most prevalent in 2020: CA attorney general
Suspects in Kristin Smart disappearance could face trial
Willie Garson, known for 'Sex and the City,' dies at 57
Officials: Many Haitian migrants are being released in US
More TOP STORIES News