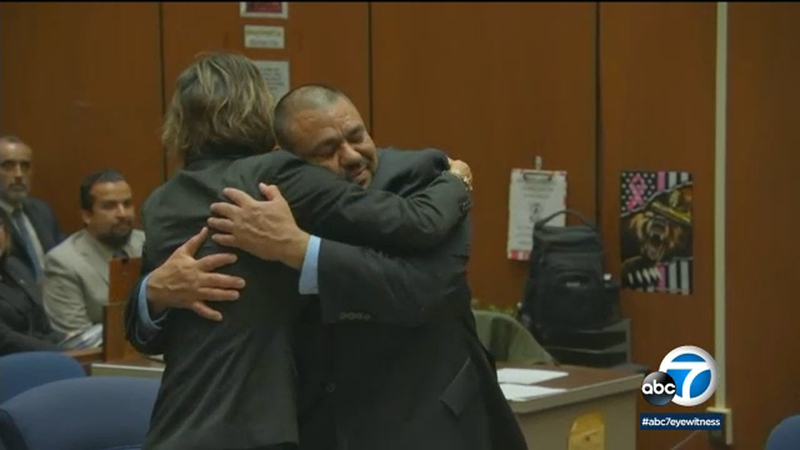 BOYLE HEIGHTS, LOS ANGELES (KABC) -- A Los Angeles man who was wrongly convicted in 2008 for a series of armed robberies in Boyle Heights was released from prison Tuesday, prosecutors announced.

Ruben Martinez Jr. became a suspect in a string of unsolved armed robberies at the same auto body shop after eye witnesses identified him as the assailant, according to the Los Angeles County District Attorney's office. His alibis were not fully presented and Martinez Jr. was later convicted of nine counts of second-degree robbery during a retrial for the case.

He served 11 years of a nearly 48-year prison sentence. Martinez was found factually innocent of the crimes and was permanently released from prison Tuesday.

"I did not do this time by myself. My family did time. My wife did time with me, did the 11 years with me. I couldn't do it on my own," Martinez said.

Over the years, Martinez maintained his innocence, filing several appeals that were denied. He and his wife, Maria, then contacted the District Attorney's Conviction Review Unit and claimed that he was at work when two of the crimes were committed.

After essentially reopening the investigation, Martinez's claims were confirmed and a request for his release was filed on Nov. 1.

"Although the vast majority of convictions are correctly upheld, I know that, at times, the pursuit of justice is not perfect," District Attorney Jackie Lacey said in a statement. "And Mr. Martinez's case serves as a stark reminder to all of us: Despite our efforts, we don't always get it right."

Since being established in 2015, the Conviction Review Unit has overturned a total of three convictions, including Martinez's. His case was also the first time an inmate has been exonerated in L.A. County through that conviction review process without an attorney, according to prosecutors.