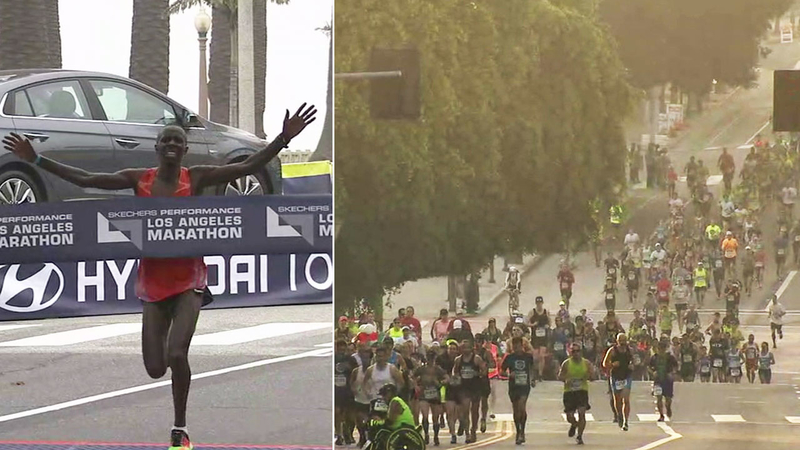 The race kicked off at 6:30 a.m. from Dodger Stadium and the 26.2-mile route ended in Santa Monica. Participants got to enjoy some of L.A.'s most beautiful areas along the route, including Hollywood, Beverly Hills and Westwood, before getting to the finish line at the intersection of Ocean and California avenues.

Over 24,000 athletes from around the U.S. and more than 63 nations were participating, according to the program.

The country of Kenya dominated the race at the finish line.

Elisha Barno, of Kenya, battled nausea near the end of the race to win the men's division, but powered ahead at the end of San Vicente Boulevard. His winning time was two hours, 11 minutes and 52 seconds. It was the 31-year-old runner's first appearance in the L.A. Marathon. Two other Kenyan natives rounded up the top three in the division.

Hellen Jeprugat, of the same African nation, had no runner anywhere close behind her, as she won the women's division with a winning time of two hours, 34 minutes and 23 seconds.

Many people were along the sidelines cheering on the runners and encouraging them to finish. One firefighter, Rudy Marin, from Ventura County, ran in full uniform to raise money for the Fallen Firefighter Memorial.

While Metro offered rail service to Santa Monica, near the finish line, bus routes in the area detoured during the event.

See the full route map below: