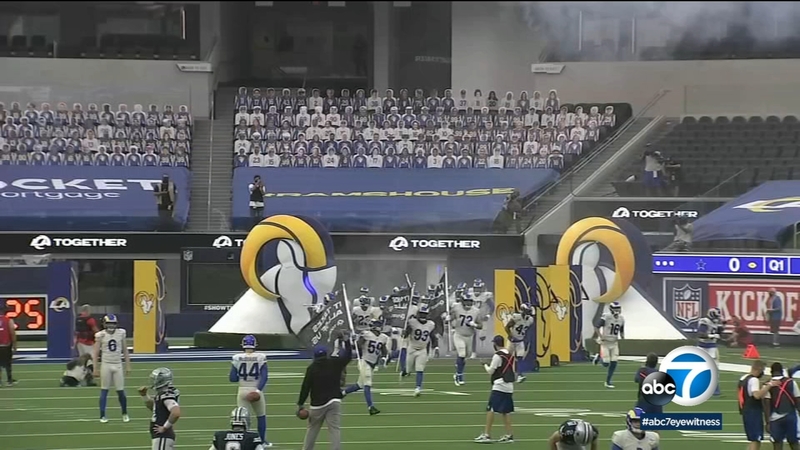 Rams take down Cowboys in 1st event at SoFi Stadium

INGLEWOOD, Calif. (KABC) -- Malcolm Brown rushed for a career-high 79 yards and two touchdowns, Jared Goff passed for 275 yards and the Rams opened SoFi Stadium in style with a 20-17 victory over the Dallas Cowboys.

Robert Woods had six catches for 105 yards to help the Rams improve to 4-0 in season openers under coach Sean McVay and spoiled the debut of Mike McCarthy, Dallas' first new head coach in a decade.

Ezekiel Elliott rushed for 96 yards and a touchdown and caught another scoring pass, but the Cowboys began a season of high expectations by losing three starters to injury in the first half and then failing to mount a late comeback in a scoreless fourth quarter for both teams.

Dak Prescott passed for 266 yards and a touchdown, but Dallas managed three points on its six drives in the second half. Michael Gallup made a long catch that would have put Dallas in field goal range with 21 seconds left, but was called for offensive pass interference for contact with Jalen Ramsey.

The opening of Rams owner Stan Kroenke's $5 billion stadium project was a historic night for the Los Angeles area, albeit one that should have been much more festive. The coronavirus pandemic prevented Rams fans from christening the palatial stadium, which is scheduled to host next season's Super Bowl, the 2023 college football championship game and the 2028 Los Angeles Olympics.

The official ribbon cutting ceremony for SoFi Stadium in Inglewood was held Tuesday, just a few days before the venue's first major event.

The Rams got the ball first in their new home, and Goff hit Woods with a short pass that turned into a 20-yard gain on the building's first play from scrimmage. The 75-yard opening drive ended with Brown's 1-yard plunge for the stadium's first touchdown.

Elliott tied it early in the second quarter with a 19-yard TD catch during which he ran through most of the Los Angeles defense.

Three Rams drives stalled for field goal attempts, and Elliott put the Cowboys ahead at halftime with a 1-yard TD run.

Brown also scored on the Rams' opening drive of the second half. They never scored again, but it was enough.

McCarthy curiously went for it on fourth and 3 from the Los Angeles 11 with about 12 minutes to play, but Rams safety Jordan Fuller made a superb tackle on fellow rookie CeeDee Lamb before the marker.

The season opener avoided a possible postponement after the team and the NFL monitored the air quality levels caused by wildfires in the region.

On Saturday, the air quality index in Inglewood was 148, way below the levels that the NFL considers "hazardous." According to the league's game operation manual, anything above 200 is considered very unhealthy and could cause the game to be delayed.

The Rams successfully rebounded from their first non-playoff season under Sean McVay, their coach since 2017. The Rams were 9-7 in 2019, losing seven of their final 13 games after a 3-0 start.

The team worked hard in the off-season, preparing for redemption after last season's brutal blowout against the Cowboys, but McVay says they are focused on moving forward.

"Every year is a near year. I think this is a great football team coming in, we expect to start off the season the right way," McVay said. "We want to be able to do that but we know that Dallas is a great opponent. What happened against them the previous year doesn't really have any effect on how we operate moving forward."

The game, like all others at SoFi Stadium until further notice, was played without fans due to the coronavirus pandemic.
The only occupants of the seats were cardboard cutouts purchased by fans who want their faces to be in the stands.

SoFi Stadium will be the site of Super Bowl LVI in 2022, the College Football Playoff title game in 2023 and the opening and closing ceremonies of the 2028 Olympics.