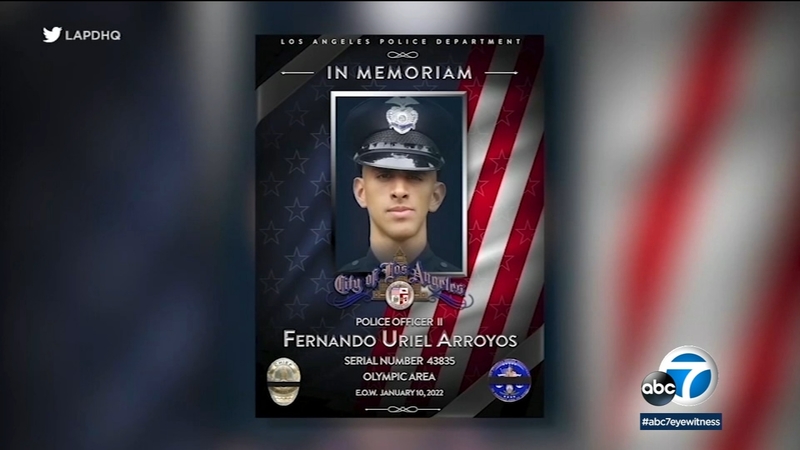 LOS ANGELES (KABC) -- Four people are expected to appear in federal court Friday in connection with the robbery and murder of off-duty LAPD officer Fernando Arroyos.

Is this a show of no confidence in the district attorney? LAPD Chief Michel Moore skirted that issue at a Thursday night press conference announcing criminal charges filed against the four individuals in Arroyos' murder, but the sheriff did not. Villanueva said that Gascón's office would not charge the suspects appropriately.

Authorities say Arroyos was house-shopping with his girlfriend near the Watts area of Los Angeles Monday when the two were robbed at gunpoint. Investigators say when Arroyos fought back, the suspects shot him.

On Thursday, federal prosecutors charged three alleged members of the Florencia 13 gang, as well as an associate, with the homicide.

Luis Rios, 27, Ernesto Cisneros, 22, Jesse Contreras, 33, and 18-year-old Haylee Grisham were all hit with murder and racketeering charges.
The investigation is being led by the L.A. County Sheriff's Office. When asked why they circumvented the Los Angeles County District Attorney's Office and instead went to federal prosecutors, Sheriff Alex Villanueva said that he felt Gascón would have gone too easy on the suspects.

"We definitely had a conversation with the local DAs and their response was not satisfactory to the gravity of this situation. They were consistent with the special orders from the District Attorney...and I believe their plan was just prosecute a simple murder with no gun enhancements, no gang enhancements, nothing. And that did not really cover the depravity of this crime," said Villanueva.

Federal prosecutors have charged four people in connection with the robbery and killing of an off-duty Los Angeles police officer and allege the suspects are tied to a street gang, authorities said Thursday.

In a statement to Eyewitness News, Gascón's office said:

Laurie Levenson, a professor at Loyola Law School and a former federal prosecutor, says that while it's rare to see investigators skirt the DA's office, this time, because of the allegations, it may be appropriate.

The three men are accused of being members of the Florencia 13 gang, which has long been in the crosshairs of federal investigators.

"On this case, given the scope of it, and the gang that's involved, the nature of the crime, he found one where he could not only take it to the feds but sort of, criticize the DA in doing so," said Levenson.

Two of the suspects were slated to be arraigned Friday, the other two are still waiting for their day in court.