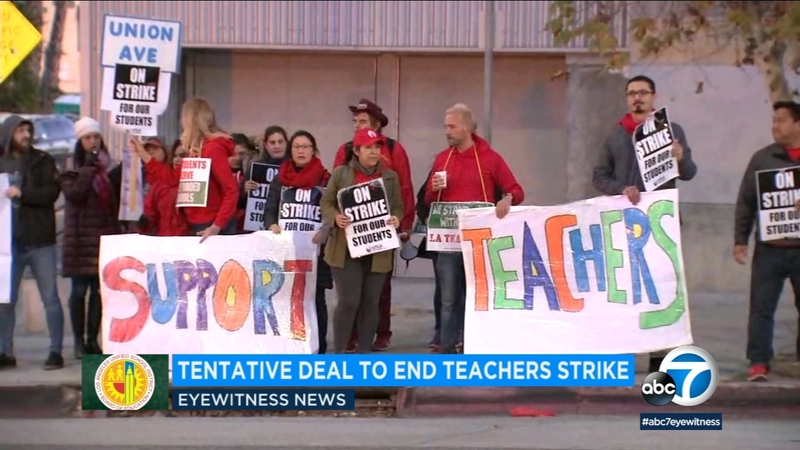 The teachers union, United Teachers Los Angeles, announced Tuesday night that members approved the deal and will be returning to classrooms Wednesday.

"It's a historic day today in Los Angeles," said Alex Caputo-Pearl, president of UTLA. "We have preliminary numbers from the vote on our agreement. And they show that a vast supermajority are voting yes for the agreement that we made with LAUSD. Therefore, ending the strike and heading back to schools tomorrow."

He said early results show about 80-83 percent of members voting in favor of the deal. Votes were still being counted and final results would be announced Wednesday.

Tuesday marked the sixth school day of the strike, which is the first work stoppage by LAUSD teachers in 30 years.

"The strike that nobody wanted is now behind us," Beutner said.

LAUSD later in the day released a statement detailing the agreement:


Other details highlighted by UTLA include the LAUSD board voting on a resolution asking the state for a cap on charter schools; and the district designating 20 "community schools" by 2019 and another 10 by June 30, 2020. The schools will have additional funding and union positions.
The teachers union had been fighting for higher wages and a commitment to lower class sizes.

LAUSD and UTLA officials were involved in bargaining discussions late into the evening Monday.

"We're very pleased right now because that's what we wanted - we wanted to go back to our classrooms," teacher Janet Curtade said. "We miss our students. We know that it's been hard for them, for their parents, but for us also."

Another teacher, Martha Garibay, said she and her colleagues "absolutely have faith in our union, that they're doing the right thing for our students."

UTLA said earlier that even if a tentative agreement is reached, it cannot be immediately enacted until a vote was taken across the entire membership.

The large crowd began its march from Bonaventure Hotel in downtown Los Angeles and made its way toward Miguel Contreras High School.