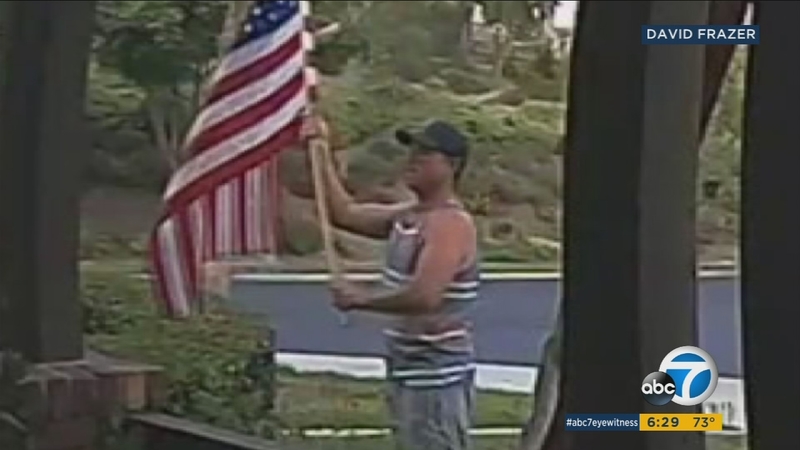 LADERA RANCH, Calif. (KABC) -- Flags in a Ladera Ranch neighborhood are always displayed proudly, but it's the patriotic and respectful gesture of a stranger that has residents talking.

Dave Frazer was returning home on July 7, when he noticed his flag wasn't posted on the side of his house. He wondered what had happened.

"I thought it was pranksters in the neighborhood and some kids did something with the flag," he said.

He went to his computer to check on a video from his doorbell surveillance system and saw the kind gesture of a stranger.

"And here I see that it's some guy that stopped to rehang it. I got a kick out of it. It's kind of heartwarming to see that," he said.

The video of the man putting the flag back on display lasted only a minute, but it's left a strong and lasting impression on Frazer and the thousands of neighbors who have viewed it.

"We're pretty patriotic people and this day and age when there's so much strife, I think to see somebody like this showing a little respect for our country and understands we're all on the same team. So it's kind of heartwarming to see," he said.

In the weeks since Frazer posted the video, he's been looking for the gentleman who put the flag back up.

"(I just want to) say thanks. It's not a big deal, but it's a patriotic thing and a kind gesture," Frazer said.

Frazer said a woman claiming that man is her brother reached out to him. He may be a neighbor, and Frazer is hoping he can soon shake the man's hand and thank him for what he did.
Report a correction or typo
Related topics:
societyladera ranchorange countyamerican flagneighborhoodfeel goodsurveillance video
Copyright © 2022 KABC Television, LLC. All rights reserved.
TOP STORIES
15-month-old is youngest person in LA County to die of COVID
Man who sparked probe into Kobe Bryant crash photos speaks out
Shooting on 5 Freeway in Sylmar leaves driver wounded
Statue honors Kobe Bryant, daughter Gianna at Calabasas crash site
LA City Councilman Mike Bonin says he won't seek reelection
Amy Schneider's historic 'Jeopardy!' run comes to an end
Santa Ana mail carrier surprises boy with cancer with his own truck
Show More
Cardi B wins $1.25M in defamation lawsuit against YouTuber
LACMA turns music into art for Interscope Records exhibit
Kaiser to be sued after mom of 3 denied COVID shot dies, lawyer says
Husband who lost wife in crash that killed Kobe Bryant still healing
Student stabbed during fight with another student in Westlake: Police
More TOP STORIES News