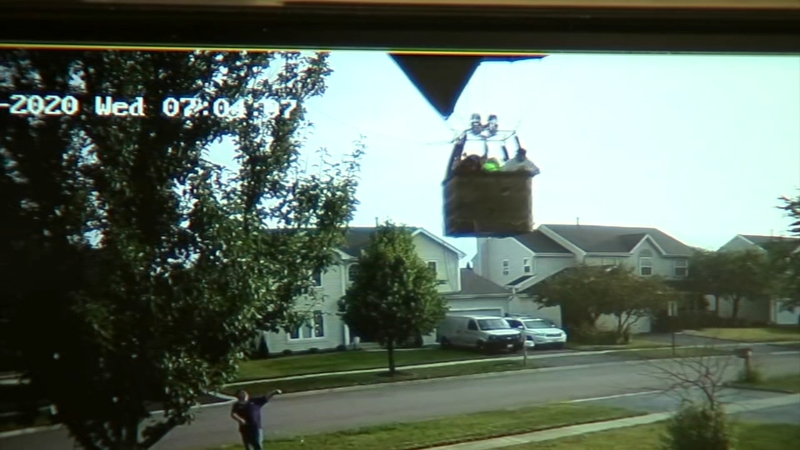 LAKE IN THE HILLS, Illinois -- A hot air balloon made an emergency landing Wednesday morning in an Illinois neighborhood after one of its occupants passed out.

Officials with the Huntley Fire Protection District received a call around 7:15 a.m. about an unconscious 80-year-old woman.

When emergency responders got to the area in Lake in the Hills, they learned the woman was having a medical emergency in a hot air balloon and that location was where the pilot expected to land.
By the time the balloon landed, the woman had regained consciousness.

Neighborhood residents said it's not unusual to see hot air balloons in the skies above their suburbs, but it is surprising when one lands in the backyard.

A woman who lives in the neighborhood caught the whole incident on surveillance footage.

"We looked out our window, and here comes the hot air balloon right between the homes here. And then they were waving at us and we were waving, like, this is awfully close," the woman said.

Officials have since learned the balloon took off with six passengers. It was in the air for about an hour when one of the passengers became lightheaded.

Bob Perkins, crew chief with Nostalgia Ballooning, who tracked the balloon as it flew said the woman was in her 80s.

According to Perkins, flying in a balloon was on her bucket list.

Pilot Chad Morin reached out to Perkins when the issue arose.

"We have a two-way radio, and we have a certain kind of language not to alarm anyone, called precautionary landing," Morin said. "I think she (the woman) felt a little embarrassed, although she had nothing to be embarrassed about."

Morin landed the balloon in the neighborhood, and fire crews were on the scene in seconds.

"The pilot did an fantastic job of landing it. Basically threaded the needle right between two houses on a residential street," said Greg Pollnow with Huntley Fire Protection District.