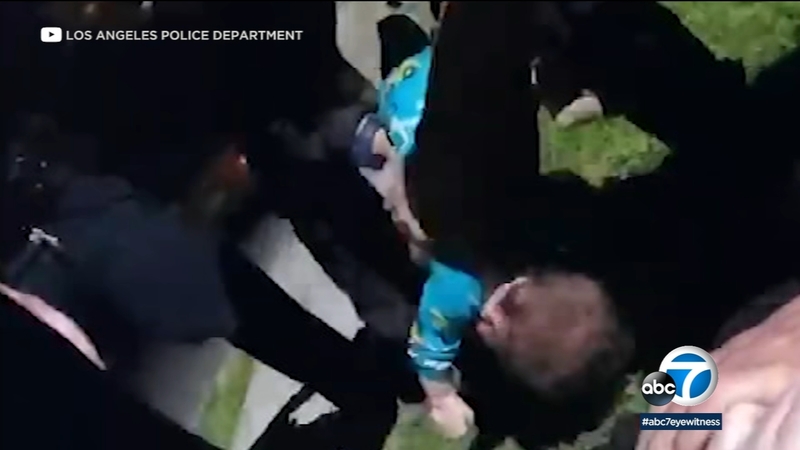 LOS ANGELES (KABC) -- An investigation is underway into a use-of-force incident that was captured on video, which shows an LAPD officer tackle a man who was carrying his infant son during a pursuit.

Warning: The video in the media player above may be disturbing to some.

The incident happened on Feb. 11 near Long Beach Avenue and 55th Street. The pursuit started after police attempted to pull over the suspect, identified as 25-year-old Josue Huerta, for driving erratically.

Huerta crashed into a truck and then began to run while carrying his son. During the short chase, the suspect pulled over and began to run from officers. Newly released body camera video shows at least one officer tackle him to the ground.

"I was trying to take him home," Huerta is heard saying in the footage.

Police say they did not know he was carrying his son at the time.

The infant was taken to a hospital, where he was treated for a small skull fracture, though it's not known if the baby was injured during the crash, the takedown or something else.

The child also tested positive for cocaine and fentanyl. He was later released to his mother.

Inside the suspect's vehicle, investigators recovered several kinds of narcotics, three 9mm ammunition clips, and a large amount of cash.

Huerta now faces several charges, including one count each of child abuse and possession of narcotics for sale.