The group gathered in front of LAPD headquarters Monday night, but it was unclear what they were protesting.
KABC 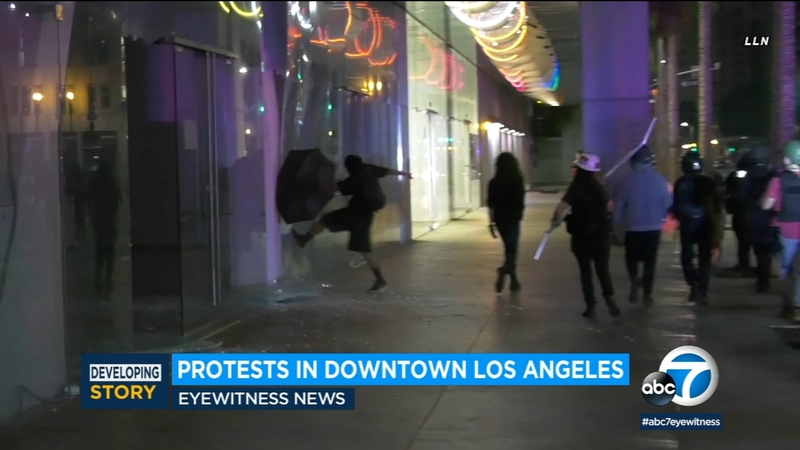 The group gathered in front of LAPD headquarters near Main and First streets about 9:40 p.m., but it was unclear what they were protesting. Information on what group might have organized the gathering was also not immediately available.

Officers stood watch behind metal barriers as the individuals, some carrying umbrellas, tore down some of those barriers along Spring Street, between First and Second streets, before moving on.

Video showed at least one person breaking a glass window of a storefront. An advertising light box was also shattered, and an ATM machine was smashed.

Other footage from the scene showed multiple people with their faces covered burning an American flag near police headquarters and using what appeared to be metal pipes to break windows of a nearby building.

Online video showed a protester with what appeared to be a skateboard standing in front of an LAPD SUV on a downtown street, pounding the hood of the vehicle and yelling "Do it! Do it! Kill me!'' The man quickly backed away when officers stopped their vehicle and began to exit the SUV. The video cut off before it could be determined what happened next.

About 10 p.m., police SUVs were parked in the intersections of Main and Second streets and Spring and First streets. The group had moved away from LAPD headquarters and was in the area of Hill and Fifth streets about 10:10 p.m.

The activity wrapped up around 11 p.m.