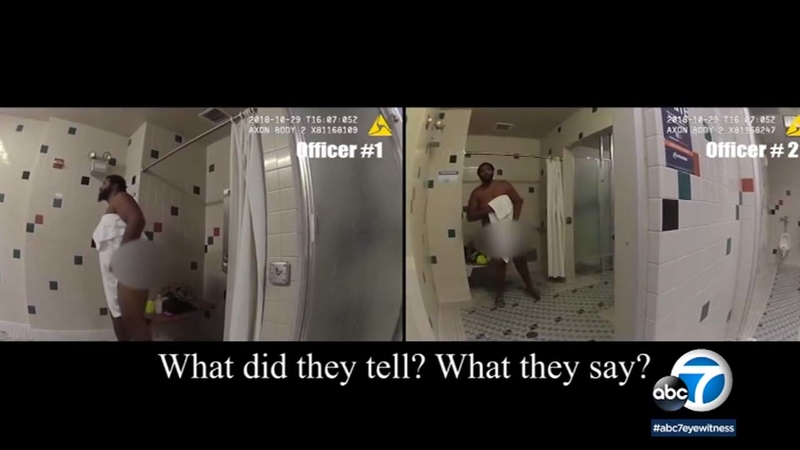 Albert Ramon Dorsey, 30, was killed by police on Oct. 29 after a fight with two officers at a 24 Hour Fitness gym on the 6300 block of Sunset Boulevard.

Capt. Patricia Sandoval said Dorsey was trespassing in the men's shower area when the shooting occurred.

Surveillance video from a parking structure underneath the gym from the day before the shooting shows Dorsey assaulting a security guard, forcefully pushing the security guard to ground, and walking away.

A battery suspect was shot and killed in an LAPD officer-involved shooting at a gym in Hollywood, authorities said.

After assaulting the security guard, Dorsey was later arrested for trespassing at the Los Angeles Coliseum.

Dorsey returned to the gym the following day after being released from jail.

Bodycam video shows officers entering the gym and being approached by an employee, who said Dorsey had threatened members.

Police officers -- a man and a woman -- were led to Dorsey, who is seen in the video naked and not complying with officers' request to leave.

When police attempted to handcuff him, both of the officers' bodycams fell to the floor, and a scuffle ensued. The officers and the suspect are not seen for the remainder of the video, but the fight is heard in the background.

Officers are heard yelling at the suspect to stop resisting and to "relax."

Tasers are heard being deployed.

"Turn around. I am going to Taser you again," one officer is heard shouting.

Several gunshots are then heard.

Police said Dorsey had started punching one of the officers in the face after straddling over her, prompting the officer's partner to shoot Dorsey to stop the attack.

The department is still investigating what happened.