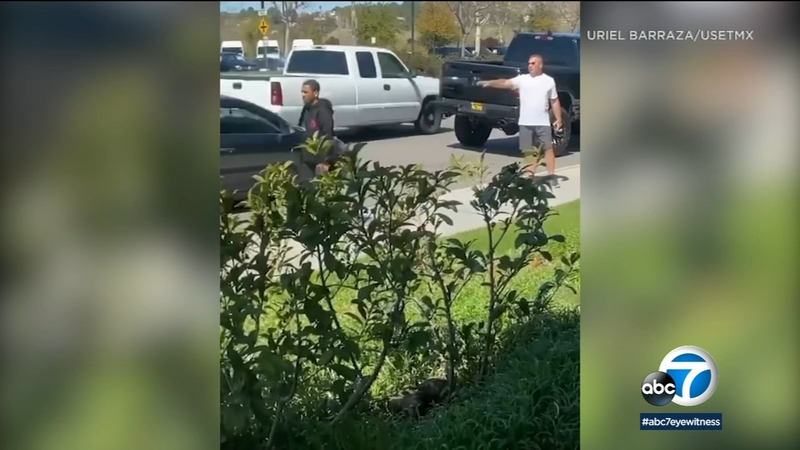 The man, who is white, can be heard saying multiple racist insults at the Black man during an argument after a minor traffic collision.

"Go back in your little cage until the monkey controller gets here," the man yells. Later in the video, the man calls the Black man the N-word.

Activist Shaun King on Tuesday posted video of the encounter on his Instagram page, and it has garnered more than 750,000 views. According to King, the encounter happened in Santa Clarita.

LAPD said it has started its own investigation and issued the following statement in response to the video:

"Los Angeles: It has come to the Department's attention that there is a video posted on social media of a retired LAPD detective. The individual in the video uses a racial slur while engaged in an argument.

"The individual is not a current member of the LAPD and retired in May 2020 as a detective assigned to Operations Central Bureau Homicide. To ensure there is no current Department nexus to this incident, there has been an internal investigation started. What is seen in the video is not reflective of the thousands of hard working and dedicated men and women of the Los Angeles Police Department."

Late Tuesday evening, the office of District Attorney George Gascón announced it will be reviewing 370 cases handled by the retired detective. LAPD says it will cooperate fully in the process.

"The video in question is disturbing & involves a former homicide detective exhibiting racist tendencies," Gascón tweeted. "@LADAOffice is taking immediate action & has identified several cases where this individual was a witness. We are in the process of notifying defense attorneys in such cases."

The video in question is disturbing & involves a former homicide detective exhibiting racist tendencies. @LADAOffice is taking immediate action & has identified several cases where this individual was a witness. We are in the process of notifying defense attorneys in such cases. https://t.co/ksQhGuo1t4

Report a correction or typo
Related topics:
los angeles countysanta claritageorge gasconlapdracism
Copyright © 2021 KABC-TV. All Rights Reserved.
TOP STORIES
Port of Oakland offers to help ease SoCal backlog
LIVE: Brian Laundrie's belongings found during search
Americans arrested for trying to board flight in Switzerland
Unvaccinated LA city workers may get extension to comply with mandate
Man shot during robbery attempt in Beverly Hills
Dog reunited with owner after being taken in car stolen at gas station
Markets and vendors all over Mexico gear up for Día De Los Muertos
Show More
Dodgers seek to even NLCS after rallying for Game 3 victory
Free college proposal likely to be dropped from Biden's spending plan
How to see next meteor shower, full moon, more
These grocery items are about to get more expensive
Missing family's vehicle found in Ohio River after 20 years
More TOP STORIES News