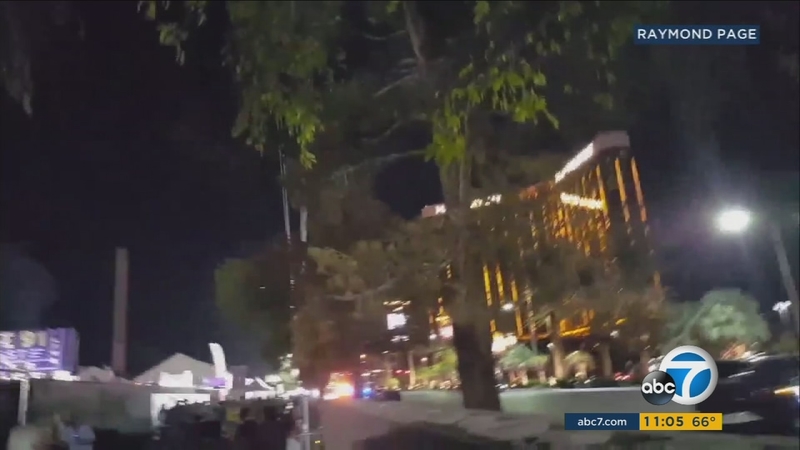 LAS VEGAS (KABC) -- While authorities have not uncovered evidence of an accomplice in the Las Vegas mass shooting, they are working under the assumption the gunman had help in his preparations at some point, Sheriff Joseph Lombardo said.

"Do you think this was all accomplished on his own?" Lombardo said at a Wednesday evening press conference.

"You gotta make the assumption he had to have had some help at some point."

Authorities have found dozens of weapons, explosives, electronic devices, and thousands of rounds of ammunition associated with gunman Stephen Paddock in his room at the Mandalay Bay and at two other properties he owned in Nevada.

Paddock's girlfriend, Marilou Danley, was questioned by the FBI in Los Angeles after she returned from the Philippines Tuesday night. Authorities are referring to her only as a person of interest and have not disclosed any indications that she may have known about the attack.

Danley's attorney released a statement saying she had no prior knowledge of the attack and is fully cooperating with investigators. She said Paddock had bought her a ticket to visit the Philippines prior to the attack and wired her $100,000 to help her family purchase a home.

Several gun shop owners have also come forward to say Paddock legally purchased firearms from their stores after passing a background check and not doing anything to arouse suspicions.

Authorities provided additional details about the planning and law enforcement response in the Wednesday evening briefing:

-- The injury count from the attack has been reduced to 489, a result of further checking and eliminating individuals who may have been double-counted or had injuries not related to the attack. The death toll remains at 58, in addition to Paddock, who was found dead in the room before the SWAT team breached the door.

-- Authorities praised the bravery of a hotel security guard who was first to approach the room on the 32nd floor where the gunman was perched. When the guard approached the door, he was met with a rapid spray of bullets - well over 200 rounds strafed the hallway, Lombardo said. The guard was injured in the leg, but remained near the scene to assist officers until they finally ordered him to seek medical attention.

"His bravery was amazing," Lombardo said.

--Paddock may have also planned to try to escape the room after the shooting, Lombardo said, but he declined to provide the evidence supporting that conclusion.

--Investigators found the explosive tannerite, typically used in firearms practice, in Paddock's car at the Mandalay Bay. They found 10 one-pound containers and two 20-pound containers of tannerite, in addition to ammonia nitrate and about 1,600 rounds of ammunition in the vehicle.

-- Paddock had obtained a room at The Ogden, a luxury condominium tower in downtown Las Vegas, at the same time the Life is Beautiful music festival was happening nearby. It is not clear if he was casing that event or practicing for the later attack. The festival featured Chance the Rapper, Muse, Lorde and Blink-182.

-- While he had set up multiple cameras in the room and the hallway, to monitor anyone approaching, none of them were recording.