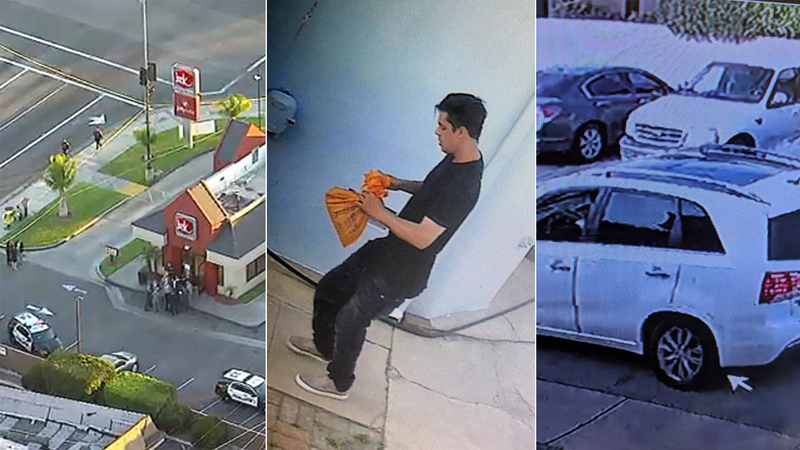 ALHAMBRA, Calif. (KABC) -- An off-duty Los Angeles County sheriff's deputy is in critical condition after getting shot at a restaurant in Alhambra Monday, officials say.

The shooting was reported at the Jack in the Box at Valley Boulevard and Fremont Avenue.

The deputy was rushed to Los Angeles County + USC Medical Center, where he is in critical condition, according to LASD Sheriff Alex Villanueva. A large contingent of sheriff's deputies converged at the hospital.

An LASD deputy remains in critical condition after getting shot in Alhambra on Monday.

The deputy was off-duty at the time of the shooting, sheriff's officials said at a 10 p.m. news conference. The unidentified 13-year veteran of the department was in civilian clothes and waiting for his food when the suspect went up to him and shot him once in the back of the head, officials said.

The suspect was caught on a surveillance camera possibly tucking his gun in his waistband after the shooting. He is described as a man between 20 and 30 years old and 5 feet 9 inches tall to 5 feet 11 inches tall. He was wearing a burgundy short-sleeved button-down shirt, slim blue jeans, a light fedora hat and sunglasses. He was armed with a handgun.

Sheriff's official said a camera from a nearby home captured the suspect changing clothes after the shooting and is believed to be in a black T-shirt and black jeans.

The suspect's vehicle is believed to be a 2010 to 2014 Kia Sorento SUV with paper plates. The search for the suspect seemed to lead authorities to Primrose Avenue near Valley Boulevard.

Several people were inside the restaurant when the shooting took place.

"I told my grandma, 'Something is up, we have to leave,'" recalled Ashley Reaza. "And then she started driving, and I look to my left and in the big window I saw like a dead body on the floor, and he was right by the soda machines. He was just laying there."