South Los Angeles playground renamed after Latasha Harlins, teen who was killed in 1991 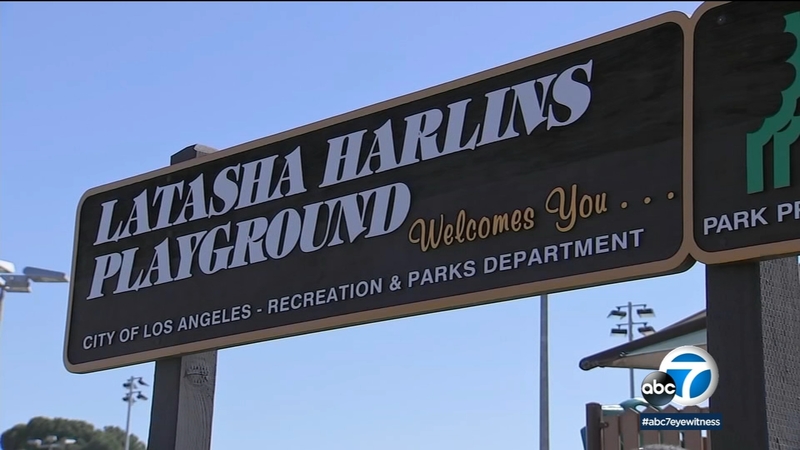 SOUTH LOS ANGELES (KABC) -- A playground in South Los Angeles has been dedicated to the memory of Latasha Harlins, a teenager whose killing by a liquor store owner in 1991 became known as a precursor to the L.A. riots.

Family, friends and community members gathered Thursday for the unveiling of the playground sign at the Sutton Recreation Center at 88th and Hoover streets.

It's the same park she grew up playing in.

"It means alot for her to be honored and for me to see this day," said her grandmother, Ruth Harlins.

Harlins, a 15-year-old Black girl, was killed by a Korean liquor store owner in a dispute over a bottle of orange juice. Store surveillance captured the shooting.

Police later confirmed Harlins had not attempted to shoplift. The woman who killed her was convicted of voluntary manslaughter and sentenced to just five years probation.

A mural honoring the life of Latasha Harlins was unveiled on what would have been her 45th birthday.

"I still miss her and I wish she was still here but I know she's in heaven," said Richard Brown, her uncle.

For Harlins' family and friends, they gathered not to focus on her death, but to celebrate her life.

"It just means so much that people are remembering her and she's back in conversation again," said Tybie O'Bard, a childhood friend.

And they say this dedication will do that for years to come.

"Now when kids come to this park, not only will they see the mural, but they'll also see the sign -- and any little girl, little boy or child that looks at that name, they're going to wonder who is that -- which leads them into researching and finding out more about who she was and what she did and what she meant to this community," O'Bard said.