The LAUSD cut its police budget by $25 million and redirected that money toward the $36.5 million Black Student Achievement Plan.
KABC
By Phillip Palmer 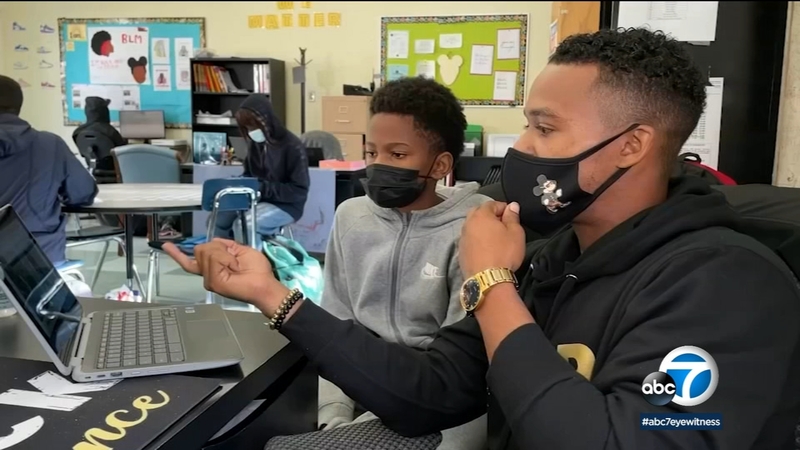 Protests surrounding the death of George Floyd are proving to be more than the actions of a frustrated community - they're becoming the impetus of change. One needs look no further than changes being made within the Los Angeles Unified School District.

"This is the first time, historically, where we've actually allocated funds in a targeted manner to support the achievement of Black students in a concentrated manner across the district to really address those historic gaps in a really concerted effort," said LAUSD Senior Director Jared DuPree.

LAUSD cut its police budget by $25 million in the summer of 2020 and redirected that money toward the $36.5 million Black Student Achievement Plan.

Across the district, BSAP, as it is known, provides for educators like Gregory Sims at Dana Middle School. Sims is a School Climate Advocate who creates a rapport with students, helping inspire them to reach academic and personal goals.

"Everybody wants to discipline discipline. Sometimes that can backfire because (when) you suspend a student, they're missing their academics so they fall behind in class," Sims explained, adding that that can make them more frustrated.

The ultimate success of the program will be determined by closing the gaps in student test scores, but for now, the anecdotal evidence of success is promising.

Dana Middle School student Dontay Biddle says he likes having Sims there because now there's someone to talk to.

DuPree gains confidence in the program when he hears the positive comments from students who are the first to benefit from the programs.

"They are the motivation why we will continue to have BSAP indefinitely, until we have all Black students in the district speak about the program and speak about their schools from a point of appreciation like Dontay," he said.

End-of-year markers for success are still to come, but the midpoint data shows suspension rates have decreased while proficient levels are up in English and math. And there's an increase across the district in the number of students on track in college preparatory classes.