Some LAUSD parents rally in Fairfax district, call for reopening of campuses for in-person instruction 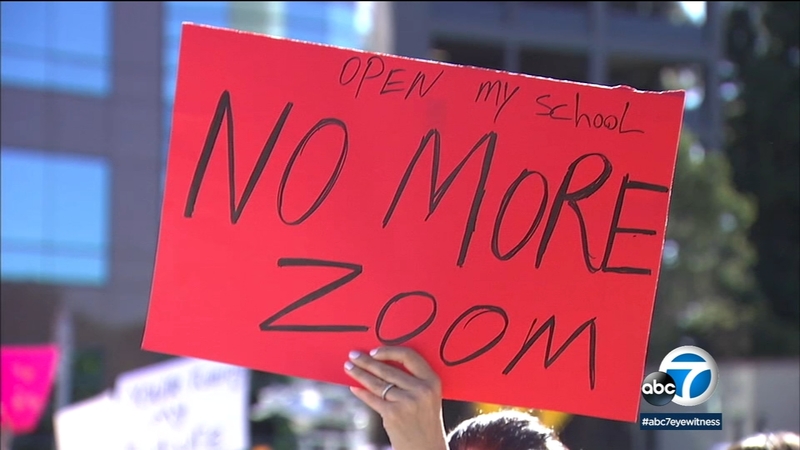 Some LAUSD parents rally in Fairfax district, call for reopening of campuses

FAIRFAX, LOS ANGELES (KABC) -- Saturday marked the one-year anniversary of the day in 2020 when the Los Angeles Unified School District transitioned to remote learning because of the coronavirus pandemic.

As the district is now working on a plan to bring students and teachers back to campuses, parents held a rally on Saturday morning in the Fairfax district to push for an expedited return to in-person instruction.

Organizers of the demonstration at Pan Pacific Park said that a tentative agreement that has been reached between LAUSD and the United Teachers Los Angeles Union, which includes a proposed hybrid model of learning, does not go far enough.

The protesters said they want their children to return to brick-and-mortar schools five days a week, especially in the fall. Many of the parents have been calling for a reopening for weeks, holding protests and "Zoom blackouts."

Los Angeles Unified School District and the teachers union have reached a deal that paves the way for a return to classrooms by mid-April.

The deal includes provisions for regular COVID-19 testing, the wearing of masks and social distancing and extra efforts to keep schools clean and safe.

"That being said, (we're) happy for elementary school kids to get some structure in their life again," Novie said.

UTLA members on March 18 are scheduled to vote on whether to ratify the deal. The union's leaders are set to participate in a conference call town hall with parents and teachers on Saturday afternoon.